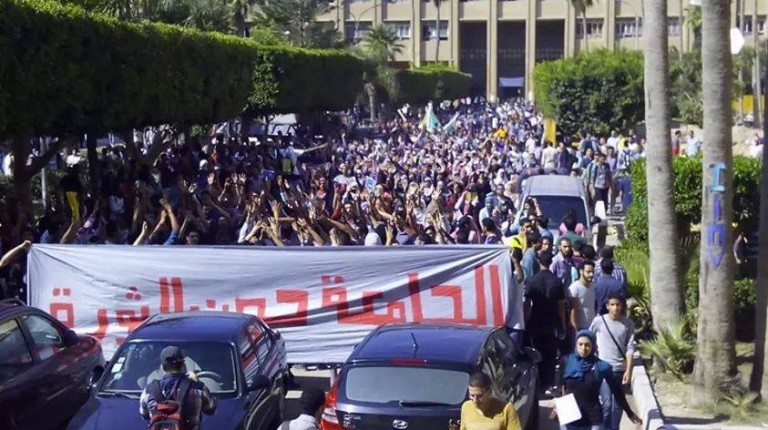 The Association for Freedom of Thought and Expression (AFTE) released a study Tuesday assessing academic freedoms in Egypt for 2015/2016, noting that despite a decline in student movements, students are still subject to violations of their freedoms.

The report starts by noting a decrease in students’ mobilisation, compared to the wave of protests that marked previous academic years, due to security measures and penalties enforced against students by universities.

Most students groups have been conducting low-profile activities such as exhibitions related to the Palestinian cause, namely Misr Al-Qawiya students and the Revolutionary Socialists, as well as some from Al-Dostour Party and other independents. Yet, these events were forcefully dispersed by security forces and then referred to investigations by university boards.

But according to AFTE, student mobilisation saw a revival in April with protests objecting the Egypt-Saudi maritime border demarcation deal, also known as the Red Sea islands case, which coincided with demonstrations nationwide. A campaign named “Students won’t sell” made efforts to remain discreet to avoid security pursuit; however, the police and prosecution authorities were soon onto its leading members.

Highlighting the continuation of violations against students, AFTE counted 84 cases of students’ arrests, 28 of which occurred in in Al-Azhar University, while Cairo University ranked second with 16 students, then Alexandria University with 13.

“They have faced various accusations such as belonging to a terrorist organisation, harming public order, using violence, and protesting,” said AFTE, adding that some have been released later.

Suspension from universities was the second type of violation of students’ freedom of expression, as the report stated that definitive suspension was commonly used against 47 students. Accused of inciting to protest, chaos, violence, absence, and writing insulting content on walls, AFTE said students have also been charged with insulting their universities over opinions expressed on their personal social media accounts.