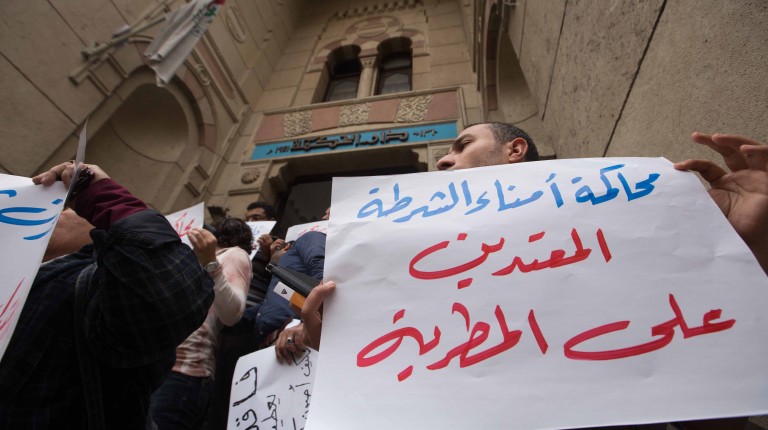 In the aftermath of mass demonstrations against police brutality staged by the Doctors Syndicate in February, nine police conscripts accused of assaulting doctors at Matariya Teaching Hospital saw their first trial begin on Tuesday.

As the first court session being usually procedural, the Matariya misdemeanours court scheduled the next hearing for 7 June, local media reported.

An investigative report previously released by prosecution authorities had accused the police officers of illegally using force against two doctors on duty at the hospital. The details of the assault, as previously told by the assaulted doctors, highlighted the conscripts’ display of power, false claims, forged medical reports, fabricated accusations, and threats to pressure the doctors to drop charges, which they eventually did.

The incident took place in January, after a dispute erupted over the treatment of a conscript who had been injured while on duty. One of the assaulted doctors, Moamen Abdel Azim, said that the police officer became angry during an argument between him and the doctors regarding the seriousness of his injury. The officer then called in his colleagues who all together locked in, assaulted, and then forcefully escorted Abdel Azim and his colleague away.

Eyewitnesses working at the hospital had confirmed the incident, which was immediately escalated by the Doctors Syndicate amid furious reactions.

Moreover, doctors claimed to have been pressured under threat by a prosecutor to drop charges.

Following the incident, the Ministry of Interior announced that the police conscripts in question would face a temporary suspension and be referred to investigation.

On 12 February, a historical gathering at the syndicate was followed by an emergency general assembly and demands for the trial of the conscripts.

Speaking again to Daily News Egypt on Tuesday, Abdel Azim said he is temporarily not working at the hospital due to feeling unsafe.

“After the incident, one of the police officers involved in the assault and who had wanted to arrest me was hired among the hospital’s security team. I was afraid they might be up to something else against me. So, I requested a long vacation,” Abdel Azim said, adding that he has not yet been called by the court to testify.