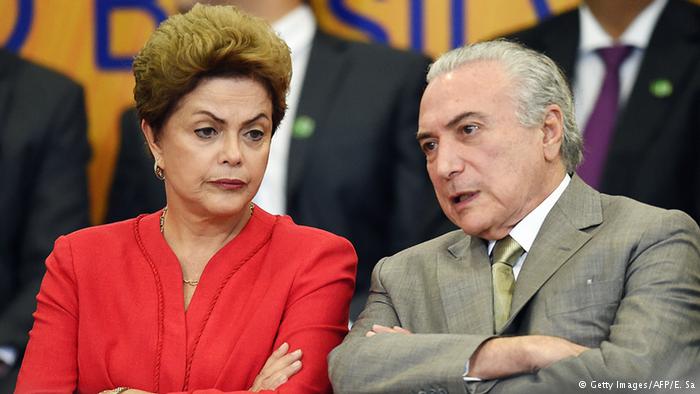 In Brazil’s political crisis anything seems possible these days. How long will Vice-President Temer cling to his post? Will there be early elections? Even a comeback of President Rousseff could happen.
Just 12 days after Brazilian President Dilma Rousseff’s impeachment, the government of interim president Michel Temer is being rocked by its first scandal. What seemed totally unthinkable just a few days ago no longer seems impossible: Rousseff’s return to the presidential palace.

“If Dilma returns and former President Luiz Inacio Lula da Silva (pictured above) takes on a strategic function in the cabinet – short term, that’s the only possible solution,” according to Valeriano Costa, a Brazilian political scientist and director of the Center for Political Opinion Research at Unicamp University. “Lula may just manage to work out a deal with the political elite that includes the left party spectrum and guarantees the country can be governed until the 2018 elections.”

Costa realizes that this scenario was completely unthinkable at the start of the week. But the political situation has changed since Planning Minister Romero Juca stepped down. The two-thirds majority necessary in the Brazilian Senate to confirm President Rousseff’s impeachment is shaky. It would fall through if two senators were to change their minds.

Romero Juca stepped down temporarily on Tuesday. The reason: the release in the Brazilian daily Folha de Sao Paulo” of a secretly taped telephone conversation in which Juca says Rousseff’s impeachment is necessary to protect Brazilian politicians from further anti-corruption investigations. Brazil’s state prosecutor is also investigating Juca for corruption.

The release of the taped conversation shook Brazil. “It shows that Dilma’s impeachment had nothing to do with the fight against corruption,” historian and lawmaker Marcelo Freixo commented in his column in “Folha de São Paulo”, adding that if it’s confirmed, “snap elections and mobilizing society to go along with a comprehensive reform agenda are the only way out.”

A snap election is not very likely, Costa says. To make that happen, both Rousseff and her deputy Michel Temer would have to step down or be convicted of a crime, he adds. But even then, elections would hardly be able to change the country’s political chaos.

“Brazil has become more modern, the economy has improved, so much has improved – but the old political system hasn’t changed, it’s just like it was in 1930, and that’s the big problem,” the political scientist says. Perhaps now, the time has come for change, he adds.

No one can say what will happen next. There are indications that the government crisis in Brazil will get worse, as more leaks of compromising telephone conversations have been announced for the next few days, including tapes of ex-President Jose Sarney and Renan Calheiros, the President of the Senate.

About one out of two members of Congress are involved in the Petrobas corruption scandal, according to media reports. Several cabinet ministers as well as Vice-President Michel Temer are suspected of having pocketed bribes. Numerous senior politicians have been sentenced to prison in the wake of “Operation Car Wash” – that’s what Brazilians call the investigation into the scandal involving the state-controlled oil company.

Temer, meanwhile, dismisses the notion of a government crisis. In Congress on Tuesday, he defended himself against accusations of weakness. “Nothing but talk! Back when I was Minister for Public Security in the state of Sao Paulo – twice – , I struggled with criminals,” he said and pounded a fist on the table. “I know what needs to be done.”

Drinking from a tree: the Swedish pine tree that packages our food