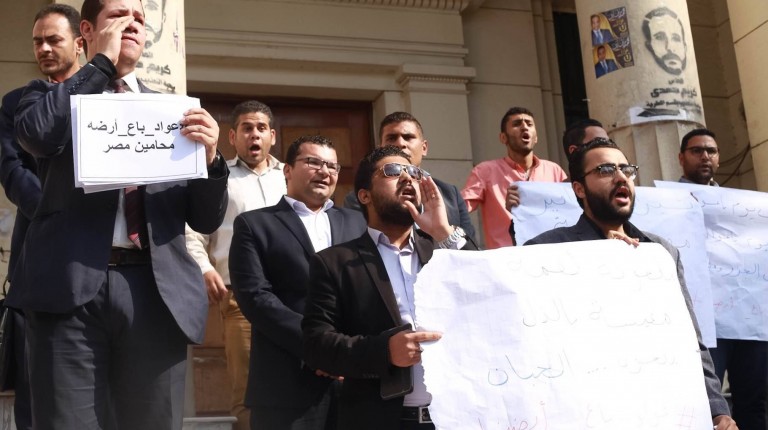 Two lawyers were assaulted by officers from Dokki police station as tensions escalated between lawyers and police over the arrests of protesters in Monday’s protests.

Officers prevented the lawyers from entering the station to attend investigations with detained protesters on Tuesday. Two lawyers were assaulted in the process. Police officers said they were instructed not to allow lawyers to enter but the lawyers insisted on the defendants’ right to counsel.

Earlier on Tuesday, the prosecution office sent staff to represent 87 protesters who were arrested on Monday during nationwide protests that objected to the maritime demarcation deal that transfers the sovereignty of Tiran and Sanafir islands to Saudi Arabia.

The lawyers’ insistence on attending the investigations led to verbal clash with police forces that led to two of the lawyers being assaulted by officers, according to eyewitnesses.

Angered lawyers initially planned to launch a sit-in outside the police station, before interference from the Lawyers Syndicate and a police report against the police officer helped to put an end to the situation.

A lawyer with the Front of Defence for Egyptians Protestors’ (FDEP) Abdelrahman Khogaly, one of the assaulted lawyers, said representatives of the lawyers’ bar were trying to convince him not to file a report against the police officer.

A statement from the head of the Lawyers Syndicate Sameh Ashour stated that reports are to be filed to the prosecutor general to take the necessary legal action against “the brutality and savageness that our colleagues were subjected to”.

“We will take the necessary escalating legal steps until the issue is resolved,” Ashour said.

The demonstrations on Monday broke out in Cairo, Giza, Alexandria, Ismailia, Daqahliya, Sharqeya, Damietta, Menufiya, and Sohag, and were met with a strict security clampdown.

According to a number of rights NGOs, at least 300 were arrested and 10 protests were dispersed.

More people arrested from their homes ahead of 25 April protests