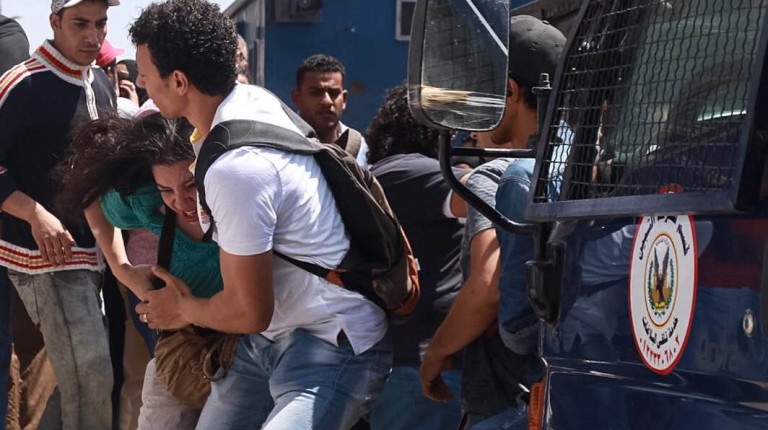 The families of detained protesters were assaulted while waiting outside a Cairo court for a verdict on Tuesday. Twenty-five Red Sea islands protesters were scheduled for an appeal session against an order issued on Monday to renew their detention for 15 days.

As security forces escorted the detainees to the prisoner transport vehicle among a crowd of relatives and activists, a group of women—likely to have been commissioned by an unconfirmed party—attacked all women and girls present, particularly targeting young photojournalists, according to a Daily News Egypt reporter at the scene. The police did not intervene to stop the assaults.

Journalist Rasha Azab, who was also present, reported on her Twitter account that “police-supported thugs attacked female activists and protesters” in a practice she had previously witnessed during protests.

The case of the 25 detained protesters raised controversy among human rights’ advocates, as they were arrested during large demonstrations last Friday and detained despite the release of hundreds of other protesters that day.

Moreover, lawyers accused prosecution authorities of manipulating their case, after they revoked a decision granting them a release, “unjustifiably” ordering the extension of their detention. On Tuesday the court rejected their appeal against their prolonged 15-day detention.

Hundreds of anti-government protesters gathered on Friday in front of the Press Syndicate in downtown Cairo as protests against the recent Egyptian-Saudi maritime demarcation escalated.

Judiciary is vanguard in confrontation against ‘plots’: Al-Sisi