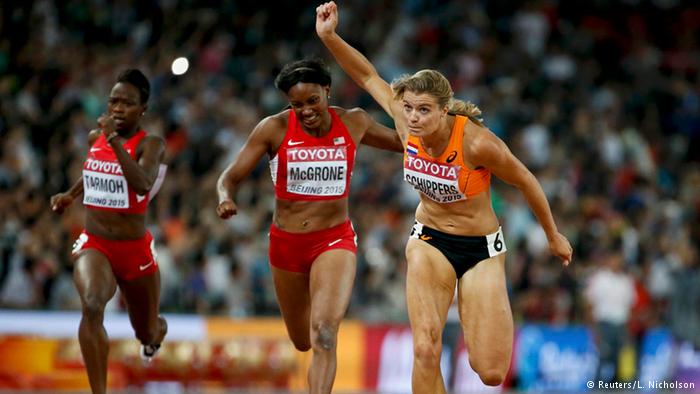 Records were broken and surprises were everywhere in Beijing on day eight of the World Athletics Championships. Germany secured an out-of-the-blue silver, while Dafne Schippers came through to win the 200 metres.

It was a successful day for Europe on day eight in Beijing. Dutch sprinter Dafne Schippers won the 200 metres in a world championship record of 21.63 seconds, lunging past Elaine Thompson at the finish line. Thompson took silver in a personal best of 21.66, just ahead of Jamaican teammate Veronica Campbell-Brown in 21.97.

Russia’s Sergei Shubenkov did exactly the same to surprise everyone and win the 110-metre hurdles final in a Russian record of 12.98 seconds. Hansle Parchment of Jamaica took silver in 13.03, edging Olympic champion and world-record holder Aries Merritt of the United States by 0.01. Merritt, who has a kidney condition which will require a transplant early next week, took the bronze.

In the women’s 100 metre hurdle final, Jamaica’s Danielle Williams took gold in a thrilling and closely fought race. Germany’s Cindy Roleder took a surprise silver in 12.59 and Alina Talay won bronze in a Belarus national record of 12.66. The final was deprived of two American’s when Dawn Harper-Nelson crashed heavily in her heat and Kendra Harrison was disqualified for a false start in the next.

The rest of the world did enjoy success though. American Tianna Bartoletta won her second long jump world title, 10 years after her first. Bartoletta won with her last attempt, jumping 7.14 metres to take gold off Shara Proctor of Britain (7.07). Ivana Spanovic of Serbia was third at 7.01. There also success for Ashton Eaton, who set a world record in the decathlon’s 400-metre race, winning his last event of the day in 45.00 seconds. That gave him 4,703 points overall after five events and a lead of 173 over Damian Warner of Canada.