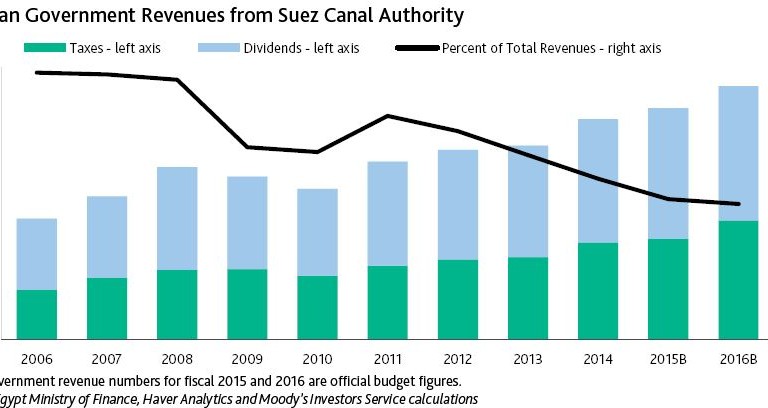 The research added that the degree of support will depend on the acceleration in global trade growth “which seems unlikely to materialise quickly”, Moody’s said. The ratings agency added that it expects limited credit-positive effects for Egypt during the current fiscal year.

The New Suez Canal project, which was inaugurated on 6 August, Is a 35 km extension running parallel to the existing canal. It is part of a wider project to turn the surrounding area into an economic zone of a special nature for manufacturing and logistics.

In a July report, Moody’s said that the budget for FY 2015/2016, showed a fiscal deficit of 9.9% of GDP, represents a slower fiscal reform than projected by the government’s Medium-Term Macroeconomic Policy Framework and the government’s pre-budget statement for 2016 that estimated a budget deficit of 9.6% of GDP.

The slowdown in fiscal consolidation [reducing the fiscal deficit] is a negative sign, because it will translate into smaller reduction of public debt and keep the government’s gross borrowing needs “precariously high for a longer period”, said the report.