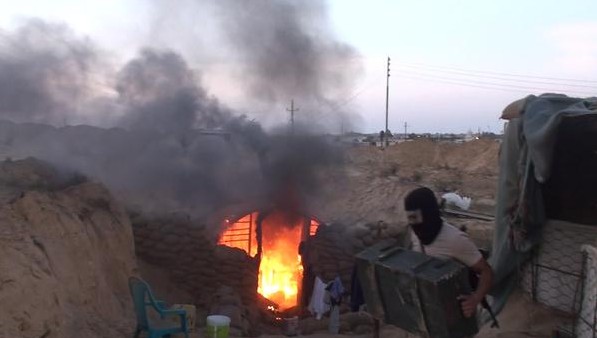 In a statement, the group noted that the attack targeted seven security checkpoints on the Al-Arish- Rafah road. The group claimed to have killed and injured “tens” of the security personnel, and that the group was able to seize two military vehicles in addition to military weapons. However, the statement did not mention any losses on the side of the militants.

Contrary to their claims, the military spokesperson announced on the day of the attack that clashes between “terrorists” in Al-Arish and Sheikh Zuweid resulted in the death of five security personnel and several injuries and the death of 15 of the “terrorists”.

However, several media outlets reported the number of security personnel who were killed to be at least 15.

The militant group further claimed to have targeted an Apache helicopter belonging to the army, and that in response the army launched “random airstrikes” that hit civilians.

Two North Sinai residents confirmed to Daily News Egypt the death of at least three civilians as a result of the attack. Reports also added that civilian injuries have exceeded 10. However, the exact numbers were not officially confirmed.

The armed forces have been engaged in a “war” with the aim of “eliminating terrorism” from North Sinai, the site of the highest frequency of insurgent attacks, with the militant group ‘State of Sinai’ claiming almost all the attacks.

On 24 March, two conscripts were killed and seven others injured following an explosion beside a military vehicle in the North Sinai city of Sheikh Zuweid, which was claimed by ‘State of Sinai’ hours later.

The group claimed two attacks launched in Al-Arish on 10 March, killing a civilian and a security officer, and leaving more than 50 security personnel injured.

The armed forces crackdown on militants since the beginning of February has left more than 300 militants dead, according to several statements from the military spokesperson.

Their operations also aim to destroy smuggling tunnels connecting the Gaza Strip with Sinai. On 29 March, the Egyptian army announced the discovery of the longest tunnel in North Sinai which is 2,800 metres long, surpassing a tunnel found mid-February, which was 2,500 metres long.

A 5 km long buffer zone on the Rafah border is currently being implemented in order to destroy all the tunnels leading in and out of Sinai, to avoid the infiltration of militants and weapons.