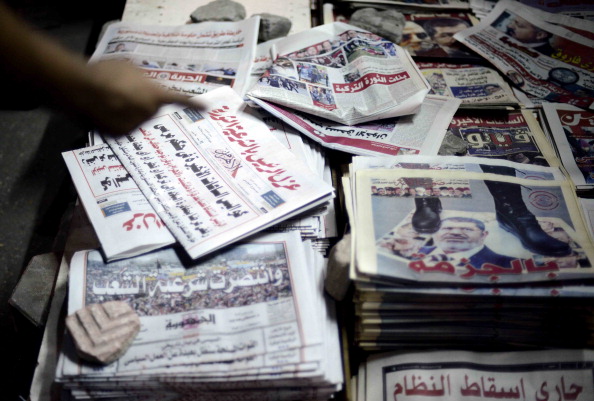 Khaled Elbalshy, editor-in-chief of Al-Badil newspaper, said that the Sunday meeting between the editors-in-chief of several major state-owned and private newspapers, in which they announced their support of the Egyptian state in its fight against extremist militants, is “an official declaration of the nationalisation of press freedom in the country, which will lead to more censorship and restrictions”.

The joint statement by the editors was published on Sunday in the news portal of Al-Wafd newspaper, and said the editors condemned the recent Sinai militant attacks; affirming their will to support all security measures taken by the Egyptian state to confront terrorism and to promote homeland security.

The editors asserted their “commitment to securing freedom of speech, which the 25 January and 30 June revolutions guaranteed”. However, they also declared their rejection of any attempt to undermine the role and the performance of the army and the police.

“We pledge to stop publishing any statements that may incite violence, support terrorism, or exaggerate the size of the Muslim Brotherhood protests inside and outside universities,” read the statement.

Elbalshy stated that the editors’ statement marks the return of what he called “state of war media”, adding that following this meeting journalists have turned into “informers for the security forces”.

“Those who participated in the meeting transformed themselves into blind supporters of the president, which will undermine the presence of any political opposition.”

A true war on terrorism can only take place in the presence of a free press which exposes the violations of extremists, said Elbashy.

The meeting took place in the headquarters of the Al-Wafd newspaper in the presence of the chief editors of Al-Ahram, Al-Akhbar, Al-Gomhuria, Al-Masry Al-Youm, Al-Watan, Al-Wafd, Al-Shorouk, El-Tahrir, Al-Youm Al-Saaba, Al-Ahali, Al-Fajr, Al-Mesaa, Al-Esboe, and Al-Gamaheer newspapers, as well as the Head of the Press Syndicate Diaa Rashwan.

The attendees also demanded a mechanism for coordination between newspapers and satellite channels to “face terrorist plans and seek to take action to prevent the infiltration of elements supporting terrorism into the press”.

A number of independent newspapers did not attend the meeting, including Daily News Egypt, Al-Dostour, and Al-Badil.

The Journalists Against the Protest Law movement – a group formed earlier this year to demand the annulment of the controversial legislation – condemned the decisions taken in the meeting, describing them as an attempt to “nationalise the press and allow the authorities to censor and restrict all opinions that oppose the current government”.

“The meeting is an unprecedented event in the history of Egyptian journalism, where journalists themselves asked the state to censor the media,” added the group.

The group refused to “permit the authorities to use the fight against terrorism to confiscate all forms of freedom, and specifically the freedom of the press”.

The state-run Egyptian Radio and Television Union adopted a similar line to the editors’ statement, declaring that the Egyptian broadcast media should expose and confront “the unpatriotic press which aims to spread chaos in the country”.

On Sunday, Abdel Rahman Rashad, head of Egyptian Radio, announced that the radio station will launch an awareness campaign on military judiciary, according to MENA.

Rashad added that, in the campaign, the radio station will host experts and former military judges to make it clear to audience what the law stipulates, to counter the statements by “Muslim Brotherhood members and human rights activists”.

President Abdel Fattah Al-Sisi issued a decree on Monday that will refer those accused of crimes against the state’s “vital” facilities to military prosecution.

The law “[relates] to the protection of vital and public facilities” according to a Monday presidential statement, which added that the armed forces and police will take coordinated action to protect these facilities.