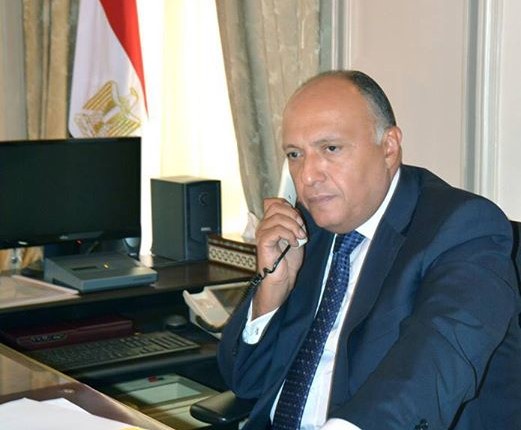 Egyptian Foreign Minister Sameh Shoukry discussed the “continued Egyptian efforts” to maintain the ceasefire in Gaza with his American and French counterparts over the phone on Tuesday.

A 72-hour humanitarian ceasefire brokered between Israel and Palestinian factions by Egypt came into effect one minute past midnight on Sunday, the second in under a week.

Shoukry informed Kerry and Fabius of developments regarding the “course of the ongoing indirect negotiations taking place in Cairo with the purpose of maintaining the temporary ceasefire, lifting the Israeli siege on the Gaza Strip and working on reconstructing the strip”.

Tuesday is the second day of resumed indirect talks between the Israeli and Palestinian sides in Cairo. Hamas leader Moussa Abu Marzouk was cited by state-run MENA as saying on Tuesday, “we are facing difficult negotiations”. He said the first ceasefire ended without a noteworthy achievement and that this is the second and final ceasefire, adding that the seriousness surrounding these talks is now clear.

Khaled Al-Batsh, a leader in Gaza’s Islamic Jihad movement, was cited by state-run MENA as saying that he will not accept any mediation other than that of Egypt. Al-Batsh, who is part of the talks in Cairo, added that the latest round of talks is the most “serious, intense and difficult”.

Paul Hirschson, an Israeli foreign ministry spokesman, had said on Monday that after various attempts at a ceasefire the “level of trust is not that high” and Israeli Prime Minister Benjamin Nentanyahu insisted on Sunday that Israel would “not negotiate under fire”.

On the other hand, Hamas’ political bureau chief Khaled Meshaal reiterated on Sunday in an interview with AFP that there could be no long lasting truce that does not include lifting the blockade on Gaza.

The indirect talks in Cairo continue to use an Egyptian ceasefire initiative, which was first presented on 14 July but rejected by Hamas after the group claimed it was not officially approached to participate. Israel accepted the agreement but resumed its airstrikes after it was apparent that the deal had not been accepted by Hamas.

The conflict, which began on 7 July, has killed over 2,000. In Gaza alone 1,948 people have been killed, including “1,402 civilians, of whom 456 are children and 237 are women”, according to the United Nations Office for the Coordination of Humanitarian Affairs.