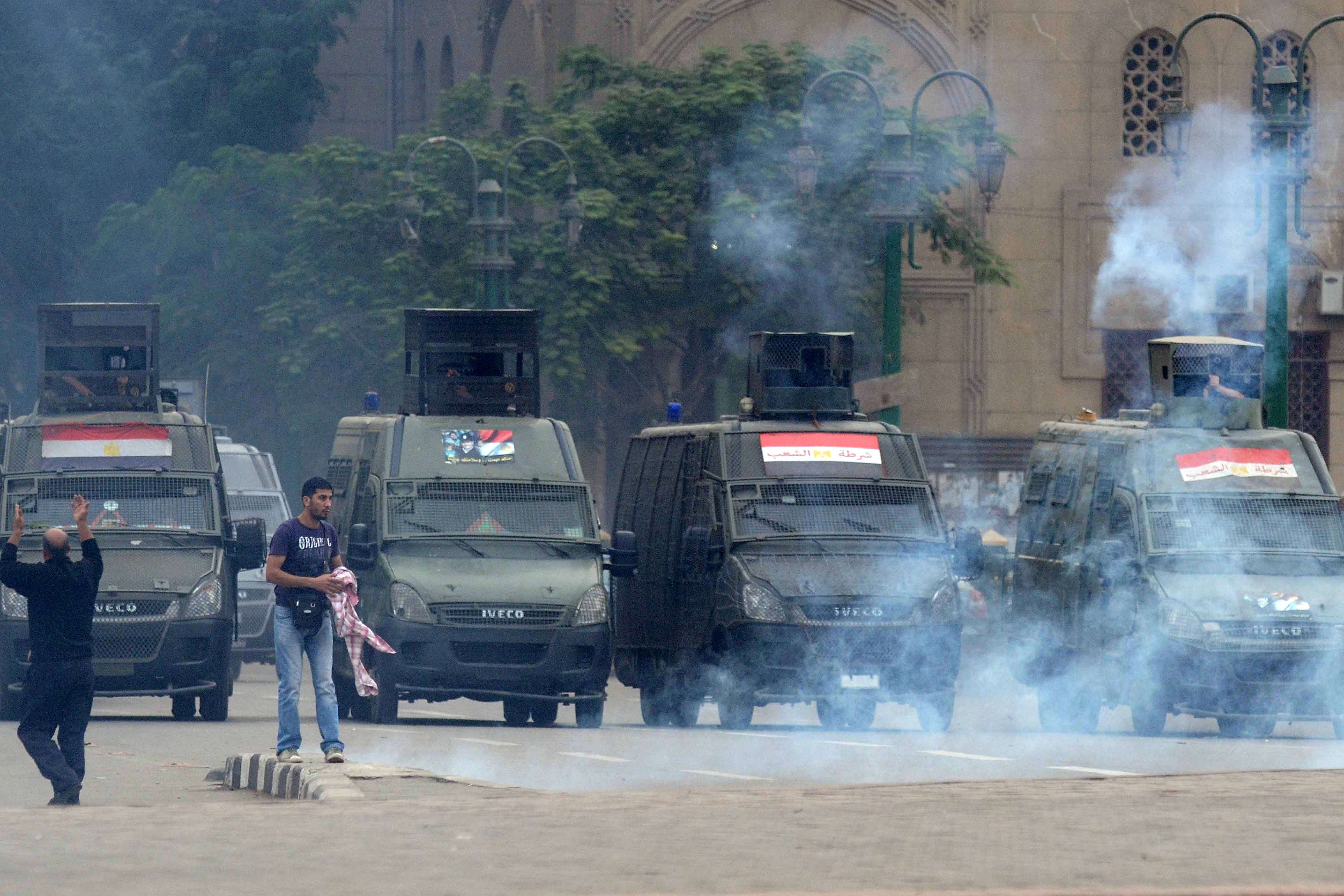 Security forces dispersed a protest organised by Students Against the Coup (SAC) in Tahrir Square on Sunday after the student group march from Cairo University reached the square.

Around 3pm, the student group marched from Cairo University to Tahrir following protests at the university campus, with the march reaching the square around 4.30 PM

Protesters then regrouped at the intersection of Talaat Harb and Al-Bostan streets, and chanted against the Ministry of Interior and what they described as “military rule”. Protesters began hurling rocks at security and army forces based at the intersection of Talaat Harb Street and Tahrir Square. Security forces were joined by area residents who chanted against the Muslim Brotherhood, while SAC protesters chanted for former President Mohamed Morsi.

Police forces fired teargas on protesters, leading to a series of hit-and-run clashes, which were still ongoing at the time of print.

Earlier Sunday at Cairo University, a total of around 2,000 students protested in several gatherings in response to the death of engineering student Mohamed Reda on Thursday.

Protests started around noon when hundreds of students and professors assembled in front of Cairo University dome, chanting against the Ministry of Interior, demanding the trial of its head Mohamed Ibrahim and Minister of Higher Education Hossam Eissa. SAC joined the protest later.

Numbers then rose quickly in front of the dome, with chants of “one hand” and “all of us are one” declaring unity between the initial protesters and SAC protesters.

SAC marched outside campus towards Al-Nahda Square, where they set a police vehicle on fire and destroyed an advertisement supporting the constitutional referendum and burnt it along with the vehicle, amid the complete absence of security forces.

Meanwhile, protests organised by the students union continued in front of the university’s dome.

SAC then marched from Al-Nahda Square, along with another march that came from Cairo University’s Faculty of Pharmacy, located a kilometre away from the main campus.

After a brief stop in front of the university’s campus, the SAC march moved towards engineering faculty, where students barred their entrance, citing conflicting causes.

The SAC march later regrouped in front of the university campus, where it was joined by another SAC group and marched towards Tahrir Square, where they were dispersed by security forces.

Sunday’s protests were organised by several student organisations, including the SAC, to condemn the death of second-year engineering student, Reda, who died on Thursday after police forces dispersed SAC protest inside Cairo University’s campus.

The Cairo University administration issued a statement on Saturday condemning the violence.

The statement, which was signed by the university’s chairman, Gaber Nassar, said investigations would be carried out regarding the violence of security forces on Thursday, which he said “crossed every line” and resulted in the death of a student and the injury of several others.

The university promised to form a committee headed by the deputy dean of the Faculty of Engineering, the head of the legal department and the representative of Cairo University Students Union.  A legal team will be formed to sue the perpetrators according to the statement.