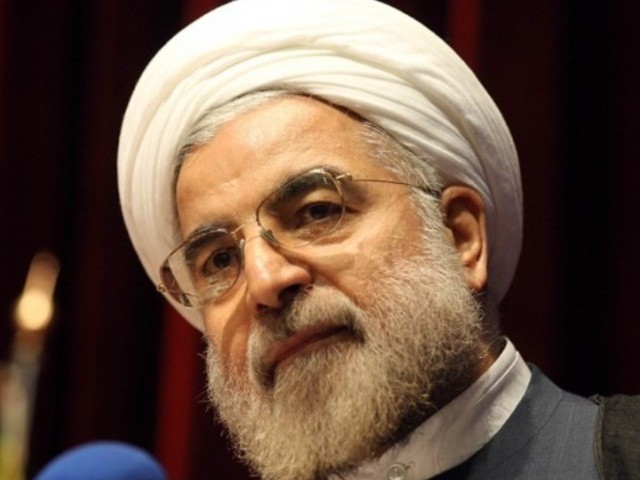 (AFP) – Iran’s new president Hassan Rowhani was set to take the oath before parliament on Sunday a day after taking office with a promise to work to ease crippling western sanctions.

The 64-year-old cleric, who the west is hoping will take a more constructive approach in long-running negotiations over Iran’s controversial nuclear programme, was also expected to unveil his government line-up, Iranian media reported.

Rowhani formally took office on Saturday at a ceremony in which he received the endorsement of supreme leader Ayatollah Ali Khamenei, who retains the final say on all strategic issues, including the nuclear talks.

Ten heads of state from around the region were due to attend Sunday’s parliamentary session, set to start from 11.30 GMT, Iranian reports said.

Also present will be former EU foreign policy chief Javier Solana, who has represented world powers in nuclear talks with Tehran in the past.

Rowhani begins his four-year term with Iran facing international isolation and tough EU and US sanctions against its oil and banking sectors that have sent the value of the rial plummeting and inflation soaring.

The moderate conservative, who is himself a former chief negotiator in the nuclear talks with the major powers, has vowed to engage more constructively with the international community in a bid to reverse the damage caused by the hard-line policies of his firebrand predecessor, Mahmoud Ahmadinejad.

His first staff appointment, the nomination as chief of staff of Chamber of Commerce and Industry president Mohammad Nahavandian, who holds a doctorate in economics from George Washington University and a US Green Card, was seen as a statement of his priorities.

“The trajectory of my government will be saving Iran’s economy and constructive engagement with the world,” Rowhani said in a speech on Saturday broadcast live on state television.

My government “will take fundamental steps in elevating Iran’s position based on national interest and lifting of the oppressive sanctions,” he said.

Khamenei heaped praise on Rowhani and said his election had delivered a “clear message” to the world.

“There is a clear message in electing a competent individual with more than three decades of service to the (Islamic republic’s) establishment,” Khamenei said.

The crippling EU and US sanctions, imposed over and above the UN sanctions slapped on Iran over its refusal to suspend uranium enrichment, have dealt a heavy blow to Iran’s economy.

Over the past two years the sanctions have sent inflation soaring to more than 45 percent, while the rial lost nearly 70 percent of its value against the dollar and created double-digit unemployment.

Western governments suspect that Iran’s nuclear programme is cover for a drive for a weapons capability. Iran insists it is for power generation and medical purposes only.

Both the United States and Israel — which has the Middle East’s sole, if undeclared, nuclear arsenal — have refused to rule out a resort to military action to prevent Iran developing a weapons capability.

Rowhani scored a surprise, first-round presidential election victory over five conservatives on June 14, on a pledge to resolve tensions with the major powers and revive Iran’s economy.

Iran has held repeated rounds of talks with the so-called P5+1 group of Britain, China, France, Russia and the United States plus Germany, but they have failed to allay western concerns.

Solana, who represented the P5+1 in past talks with Iran, was in Tehran for Sunday’s swearing-in.

In an interview published by Iran’s reformist Shargh newspaper on Sunday, the former EU foreign policy chief called Rowhani “a politician with insight… with whom one can strike a deal.”

Officially Rowhani has two weeks from Sunday to name his cabinet, and the conservative-dominated parliament then has 10 days to review his nominations.

But Iranian media said that he could unveil his cabinet on Sunday and MPs start the confirmation process within a week.

They reported that he was likely to name a government dominated by western-educated technocrats.