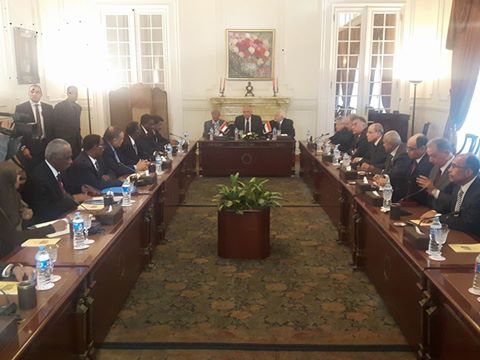 Foreign Minister Sameh Shoukry met on Monday evening with a joint delegation from the Egyptian-Sudanese Foreign Affairs Council to discuss ways to enhance bilateral relations between Egypt and Sudan.

According to a statement issued by the Foreign Ministry’s official spokesperson Ahmed Abou Zeid, the meeting tackled ideas and suggestions to develop bilateral relations, such as forming an entity that would gather ambassadors from the Nile Valley countries.

In October, President Abdel Fattah Al-Sisi met with his Sudanese counterpart Omar Al-Bashir during meetings held in Cairo for the Supreme Egyptian-Sudanese Committee. The committee first held meetings in March 2011 in Khartoum.

The Supreme Egyptian-Sudanese Committee is assigned to enhance bilateral relations between Egypt and Sudan and discuss co-operation in all fields.

Since 2011, the committee has held regular sessions at the ministerial level; however, this year such sessions were held at the presidential level.

In recent months, relations between Sudan and Egypt have slightly soured after Sudan sided with Ethiopia in negotiations over the Grand Ethiopian Renaissance Dam and has increased its calls for the Hala’ib Triangle region to be returned to Sudan.

In April, the Sudanese foreign ministry reportedly called on Egypt to negotiate over the contested areas of the Hala’ib Triangle, stating that it would otherwise resort to international arbitration to restore its rights to the region, according to official Sudanese news agency SUNA.

Regarding Sudan’s current domestic situation, like Egypt, the country was also forced to increase fuel prices in November. However, the Sudanese population responded in anger, initiating a civil strike to express their disapproval.

The Sudanese government’s decision to increase fuel prices has led to a remarkable increase in the prices of basic commodities and other necessities, such as medicines.

The civil strike has resulted in the arrest of dozens of opposition figures by security forces, according to media statements from the office of the Sudanese information minister. In addition, the privately-run Sudanese newspaper El-Garida was suspended along with the TV channel Omdurman.

Earlier in 2013, the Sudanese government made similar decisions to reduce subsidies on fuel, which led to massive demonstrations that were cracked down upon by security forces.

In Video: Illegal Sudanese migrants rescued from the Mediterranean