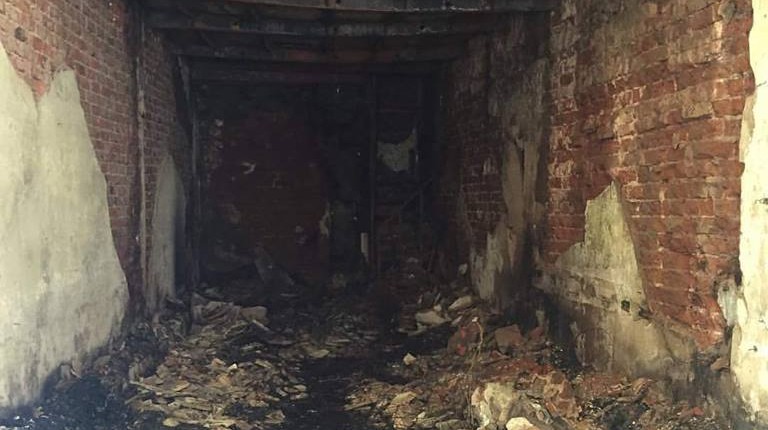 Two days have passed since a huge fire broke out in a building located in Attaba, downtown Cairo on Sunday. The building houses a hotel and several factories and rests at the centre of a popular market for wholesale traders and retailers, and a countless number of street vendors.

Hundreds of shops, most of them used to sell shoes, were completely torched, leaving their owners in peril and in debt as they were unable to save any of their goods or money.

The fire killed three people and injured at least 90 due to smoke inhalation. It also destroyed dozens of warehouses and stalls belonging to street vendors. Eyewitnesses told Daily News Egypt that the three who were killed in the blaze died after they attempted to re-enter the burning building in order to save their earnings from the fire.

While the state’s narrative claims that the fire quickly jumped to the nearby buildings that suffered the most damage, three buildings located on the left side of the fire’s source suffered no damage.

Eyewitnesses can only recall the fourth building on the hotel’s left side catching fire all of a sudden, giving way to suspicion over the fire’s source at the hotel and how it reached the other buildings.

“Could this be a targeted incident against the presence of traders and street vendors in the area?” asked one shoe shop owner, who preferred to remain anonymous.

He estimated that the damages to his shop would cost at least EGP 750,000. “This amount is not a net profit,” he told Daily News Egypt. “But they are mostly debts to factories and the value of damaged goods.”

Following his visit to the location, Cairo Governor Mohamed Aiman Abdel Tawab decided to pay a compensation of only EGP 5,000 at most to those affected by the fire. According to the shop owners, this amount does not even begin to approach the losses endured.

Eyewitnesses at the location of the blaze claimed that fire fighters took hours to reach the hotel. Residents attribute the wide scale damage of the fire to this delay in particular.

None of the fire fighters were available to comment on the damages or cause of the fire, as they are still removing burnt items and cleaning out the area.

Attaba is a historic shopping district for lower- and middle-income citizens. The products sold vary from shoes to garments and utilities, and all are sold at wholesale prices. As you walk down its packed streets you can hear the loud voices of street vendors bargaining.

The area damaged by the fire is blocked off from traffic and passersby, and is surrounded by security forces and fire fighters, in addition to the shopkeepers who continue to lament their losses.

This is not the first incident of its kind to take place in Attaba. A week ago, a fire occurred in the same exact district of the district’s Roweiy area, which caused damage to the Sednawy shop and dozens of street vendors’ stalls.

Attaba has witnessed a number of huge fires, which have commonly been declared as the result of electrical fires due to faulty wiring. In August 2015, the telecommunications building of Attaba caught fire, which resulted in landlines being disconnected in surrounding areas.

In 2008, the National Theatre located in Attaba also caught fire, which led to damages to its main hall and some of the walls and art in the building. There were no injuries reported from the incident.

On Sunday, the same day of the Attaba fire, several other reports of fires were recorded across Egypt, mostly in factories in Sohag, Sharqia, and Dakhlia among others.

How much revenues will TE realise by increasing landlines subscription fees?

Number of injured in Attaba fire rises to 74, no deaths

In Pictures: Fire breaks out at popular market in central Cairo, Al-Attaba