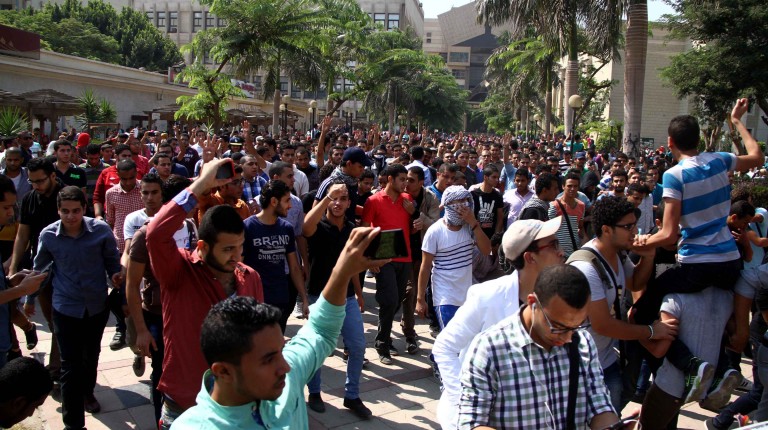 During the academic year’s first week, 18 universities across Egypt witnessed 58 protests, an average of 10 per day, according to a Saturday statement from the Democracy Index (DI).

According to DI, the clashes which have occurred as a result have resulted in the arrests of 163 students. Of these, 155 are university students, six are high school students, and  two are in middle school.

Protests have led to the expulsion of 56 students across Egypt, 18 alone of which are from the British University of Egypt (BUE). Those expelled are currently being interrogated by police on the reasons behind their protest.

According to DI, the protests called for the release of detained students, objecting to the security force’s violence and the presence of private security firm, Falcon, on campus.

The Association of Freedom of Thought and Expression (AFTE) issued a report on Saturday stating that 200 students were arrested in the past week, of whom 186 remain in prison. The report also noted that police forces stormed six universities, including Cairo University, on 12 October, and Al-Azhar University on 12 and 15 October.

The report said that some members of to the Students Against the Coup (SAC) movement smashed the electronic gates at one of the Cairo University entrances. However there were no subsequent clashes with police, as students reportedly ended demonstrations as soon as police forces entered the campus.

The Ministry of Interior released a statement Tuesday, saying that there were “no repercussions” at any of the universities to the protests. The sole exception has been at the University of Alexandria where clashes left two policemen and two students injured. The Ministry did not specify the degree of the injuries.