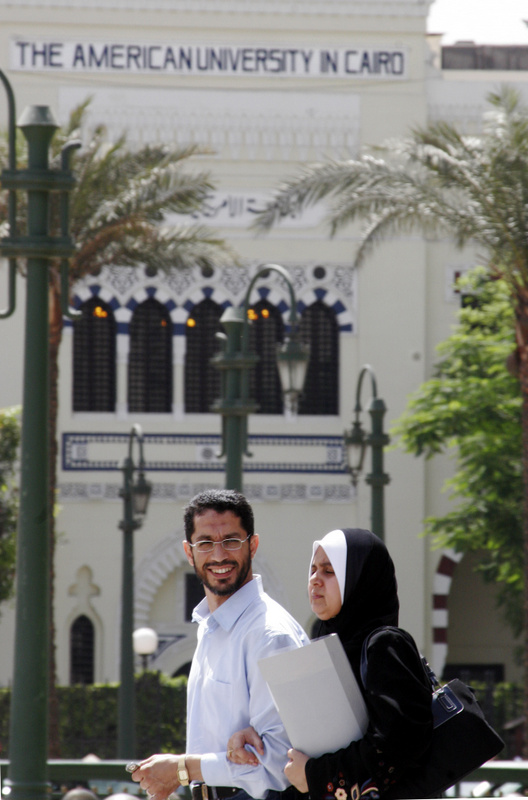 Believe it or not, I am a member of Egypt’s least-recognised minority. No, I’m not a Copt or a convert or a Bahá’í even. I am an agnostic atheist, or an atheistic agnostic. Basically, I don’t know whether or not God exists, but religion, in my humble view, is clearly manmade and not heaven-sent.

If there is a god, he set off the Big Bang and then took cover to view the handiwork of the magnificent laws he set in motion to govern the universe. He is not an interventionist micro-manager who, for some unfathomable reason, decided to place us, insignificant flecks on the back of an insignificant speck that we are, at the centre of his entire scheme.

This is the first time I’ve made such a declaration of faith, or faithlessness, in an Egyptian newspaper, and it is bound to outrage some readers and cause offence to others. That is not my intention. Although I do not wish to insult people’s most intimate beliefs, I believe I also have a right to express my heartfelt convictions, and ones which I arrived at after years of doubt, questioning, hesitation and thought.

When it comes to finding religion, we hear of epiphanies, moments when someone suddenly wakes up and sees the light. I don’t know if this is true, since I’ve never experienced a religious awakening. When it comes to losing your religion, as REM might put it, it’s more like a slow bleed or a debilitating terminal condition in which there can be periods of recovery but the end is not far off; it involves soul-searching and soul-destruction.

I felt perhaps my strongest (and youngest) faith in a non-Muslim country and lost it in a Muslim country, though I did not fully abandon it until I left Egypt again. It began with childhood doubts over why all my English friends would be going to hell when they eventually died, which matured into questions over the status of women and sexuality, as well as the contradictions and scientific errors in the Quran.

That’s not to mention the more metaphysical and philosophical questions, such as why a just and loving God would intentionally create a flawed being whom he places in a test which the omnipresent, omniscient deity already knows the outcome? Of course, I’m not singling out Islam – the same and similar questions apply to other religions.

Many believers, I imagine, will read the above with a mix of horror and even concern. They will perhaps grieve for my lost soul and wonder what emptiness and hollowness lie inside. But, on the contrary, I don’t feel that my loss of faith has left me with a God-sized hole in my heart. Nor am I like a spiritual refugee slumming it out in some frontier camp for exiled souls.

There is so much around us to instil a sense of wonder and mystique, from the science and technology that can perform endless modern-day “miracles” to the physics theories that are metaphysical in their beauty, from the God particle to the zany notion that a cascade of multiverses exists.

Others assume that deprived of religion, the non-believer loses his or her moral compass, suffers a lobotomy of his morals and exists in an ethics-free nihilistic haze. But this notion is frankly insulting to humanity as it is built on the assumption that we are errant children who have to be coerced into doing right and avoiding wrong. The main difference between the morality of the faithful and faithless is that the non-believer is much freer to exercise reason to decide which ethics to uphold and which to jettison.

My convictions are entirely my own and I don’t expect others to adopt them. Mine is not a proselytising “faith”. I believe that everyone should find their own path and decide for themselves what they wish to believe in. All I ask is that others refrain from shoving their beliefs down my throat or try nullifying mine, as numerous Islamists have done over the years.

While I respect people’s religious beliefs and admire those of a forgiving and loving spiritual disposition, there are many who do not, or would not accord me the same right. Although Egyptian law does not explicitly outlaw atheism, there are other mechanisms for targeting non-believers. These include the vague, innovative and frightening legal concepts of “insulting” and “ridiculing” religion, as well as hisbah, which have been used by crusading Islamist lawyers and the state to target non-believers but far more often believers with a different interpretation of their faith.

What I’ve never been able to get my head around is how any centuries-old religion could feel insult, and why Islam would need self-appointed defenders when the Quran itself challenges non-Muslims to doubt, question and even mock. In fact, any faith which believes its truths are self-evident does not need any of its followers to coerce and intimidate others into obedience.

There are those who will dismiss what I say as the ranting of someone who has moved too far away from his roots and lived abroad for too long. Although I do not doubt that the phases I have spent in Europe have exposed me to alternative way of thinking, most of my drift away from religion occurred in Egypt, despite the numerous beautiful aspects I admire about faith here, from the festive excesses of Ramadan to the monastic frugalities of the desert.

Fortunately for me, I was able to sever my ties with religion in a less intense, demanding and pious environment. Others have not had that luxury, and I know quite a few atheists and agnostics who hide their true beliefs from their families or are discreet about them out of fear of losing their loved ones.

It might be tempting for some to view me as an aberration, even an abomination, but I can assure them I am by far not alone.  Although I was a rare voice when I first came out of the closet, the revolution has emboldened many more non-believers to speak their  mind, even when it comes at the great personal risk of ostracism and prosecution, risks I am relatively immune to now that I only visit Egypt.

For those who may be tempted to think that the revolution has brought with it decadent ideas, let me stress that non-believers have always been around in Egypt – often openly – and have played important roles in shaping the country’s identity. In fact, up until the 1970s, atheists and those who sailed close to the wind of non-belief were prominent in the country’s intelligentsia.

For example, the pioneer of socialism in Egypt, Salama Moussa, believed that people must depend only on their minds and that each of us must “take his destiny into his own hands.” It is widely reputed that Mustafa Mahmoud, the popular TV presenter who blended religion with science, was an atheist who found God, though he himself claimed that his earlier works criticising religion were his way of testing his faith.

One of Egypt’s greatest philosophers of the 20th century, the existentialist Abdel Rahman Badawi, wrote, in the 1940s, an encyclopaedia of atheists throughout Islamic history. And there have been plenty of those, such as the Dawkins of the Abbasid era Ibn Al-Rawandi.

There are even atheists who speculate that the number of non-believers in Egypt could potentially exceed the number of Christians. If true, that would make non-belief the second largest faith community.

For the foreseeable future, we will not know as nobody has bothered to recognise or count them, and the discrimination they face has led many to lead an underground existence. But what is certain is that, alongside belief, non-belief has always been an integral part of Egypt’s social fabric, and denying they exist only breeds hypocrisy.

It is time that atheists and agnostics have their rights recognised in full, including their right to freely believe what they want, their right not to be described as a member of one of the three heavenly faiths, and their right, along with other Egyptians, to access civil courts.

Above all, we need to be regarded as equal citizens and not as targets for prosecution… or worse, persecution.