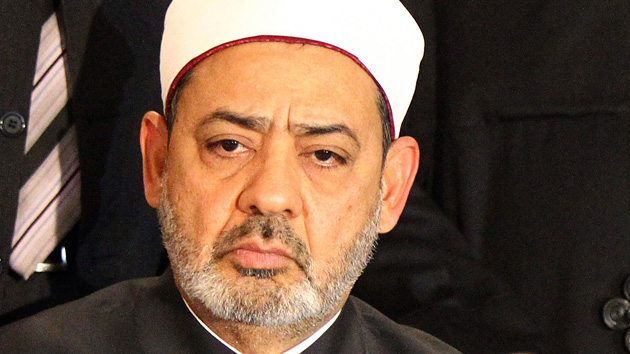 In a statement released on Sunday, Al-Azhar described the accusations Hegazy pressed against Al-Tayeb as “the fruit of his sick imagination and mind”.

Hegazy had addressed Al-Tayeb on Friday, stating that, during the 25 January revolution against former president Hosni Mubarak, Al-Tayeb had issued an Islamic fatwa that “protesting against one’s ruler” is prohibited in Islam. He also accused Al-Tayeb of being a member of the now-dissolved National Democratic Party’s (NDP) policy committee.

“How could you claim that protesting against the ruler is not prohibited now that we have a legitimate, democratically-elected president?” Hegazy asked.

In its statement, Al-Azhar clarified that Al-Tayeb did not call for protesting against President Mohamed Morsi.

“Al-Tayeb stated that armed protest is prohibited in Islam,” the statement read. “And he also stated that the legitimacy of peaceful opposition in Islam is out of the question, adding that all laws and constitutions already preserve that right.”

Al-Azhar also said that when Al-Tayeb called on protesters to leave Tahrir Square in 2011, he said so in fear of further bloodshed.

It denied that Al-Tayeb was ever related to the NDP’s policies committee. They stated that Al-Tayeb had been automatically included in a presidential institution called the Political Office due to his chairmanship of Al-Azhar University, adding that he had resigned from the institution immediately upon being appointed grand imam.

Al-Azhar also repeated that it was the first official institution to describe those who were killed during the 25 January protests as “martyrs”.

Thousands of supporters of President Morsi demonstrated on Friday to condemn violence in anticipation of the upcoming 30 June opposition protests.