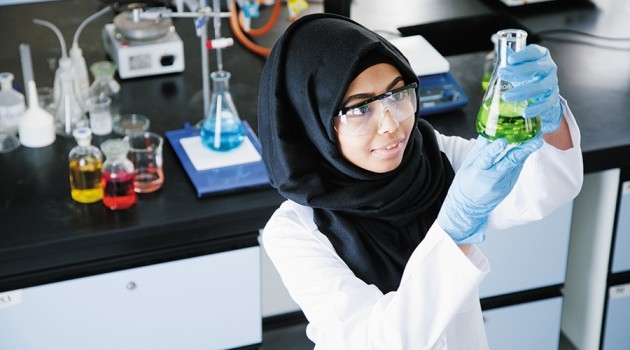 Women in science are less likely than their male counterparts to receive authorship credit for the work they do, an innovative new study finds.

Researchers for the first time used a large set of administrative data from universities that revealed exactly who was involved with and paid on various research projects.

The data were linked to authorship information on patents and articles published in scientific journals to see which of the people that worked on individual projects received credit in the patents and journals and which did not.

“There is a clear gap between the rate at which women and men are named as co-authors on publications,” said Julia Lane — a co-author on the study and a professor at New York University.

“The gap is strong, persistent, and independent of the research field.”

And there was another, even larger, gap. Women are not nearly as likely as men to be named on patents related to projects that they both worked on, with the study indicating that the gap was 59%.

The administrative data that was key to this study came from the UMETRICS dataset available through the Institute for Research on Innovation and Science, which contained detailed information on sponsored research projects for 52 colleges and universities from 2013 to 2016.

“We have known for a long time that women publish and patent at a lower rate than men,” said Lane.

“But because previous data never showed who participated in research, no-one knew why. There were anecdotes — like that of Rosalind Franklin, who was denied authorship in a famous nature article by James Watson and Francis Crick despite correctly demonstrating the double helix structure of DNA — but there was no evidence.”

Results also showed that women were even less likely to be listed as an author on what scientists consider “high-impact” articles.

“This is consistent with the Rosalind Franklin anecdote,” Lane noted. “The gap in attribution will have clear negative effects on the career prospects for women in science.  I fear that it will deter young women from pursuing science as a career,” she added.

A complementary source of data for the study reinforced the results.  A survey of over 2,400 scientists revealed that women and other historically marginalised groups must often put in significantly more effort for their scientific contributions to be recognized.

Respondents to the survey noted that “being a woman means that quite often you contribute in one way or another to science but unless you shout or make a strong point, their contributions are often underestimated.”

Furthermore, the survey results showed that 43% of women said they had been excluded from a scientific paper to which they had contributed, compared to 38% of men.

Women were also more likely than men to report that others underestimated their contributions and that they faced discrimination, stereotyping, and bias.

The new research based on the administrative data from UMETRICS and the survey results go beyond providing new insights into the causes of the long-observed gender gap in research output.  The paper showcases a new and rich data infrastructure that can provide insights into the organisation of science and could inform evidence-based policies to increase diversity in science.

The infrastructure developed by the team of collaborators enables new insights into the organisation of science by capturing the contributions of those who are often unseen — particularly more junior researchers.

The work is in the scientific tradition of the study of survivorship bias, which was made famous by a statistician’s outside-the-box realisation that military analysts should use the unseen data — planes that did not return from combat, rather than those that did, to fully understand why planes crashed.

Lane and her colleagues have shown how new data on hitherto unseen contributors can be used to identify the scientists who are not visible on published works to document systemic differences in attribution.