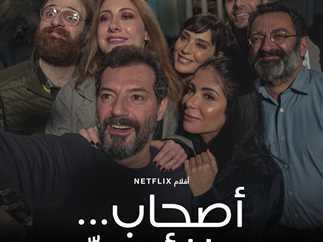 The first trailer of “Sohab Wala Aaz?” film (Friends or More?), the Arabic adaptation of the 2016 Italian movie Perfect Strangers, was released on Saturday on the global streaming platform.

The plot takes place in Lebanon and centres around a group of friends who decide to play a game. They agree to place their phones on the table and agree to disclose all their incoming texts and calls.

The game at first is a playful exercise, things, however, get decidedly more serious as untold secrets are revealed within the group.

Sohab Wala Aaz? will be released on Netflix on 20 January 2022. The film has been subtitled into 31 languages and dubbed into three languages.

Sohab Wala Aaz? has been adapted by Gabriel Yammine and Wissam Smayra; the film will be the latter’s debut feature.

The 2016 movie has been remade 18 times across many countries, including France, Spain, South Korea, Germany, and Greece.

Netflix has also signed a first-look deal for Arabic films with the film’s producer Front Row.