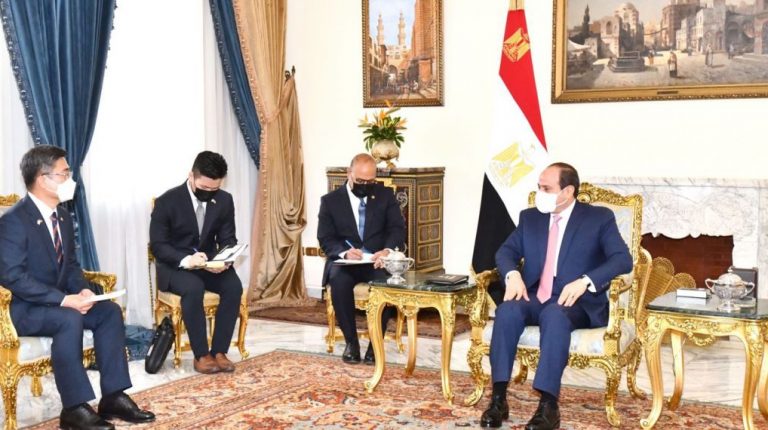 Al-Sisi met with South Korean Minister of National Defense, Suh Wook, in which the Egyptian President expressed Egypt’s aspiration to activate its comprehensive cooperative partnership with the Asian country.

Al-Sisi affirmed that Egypt now has modern and integrated infrastructure and services that provide a strong basis for international development cooperation.

The South Korean Defense Minister also conveyed to Al-Sisi the greetings of the South Korean President, expressing his country’s appreciation for the recent development and prosperity of Egyptian-Korean relations.

Moreover, Wook reaffirmed South Korea’s interest in deepening fruitful relations in light of the development boom that Egypt is witnessing under the leadership of Al-Sisi, in addition to the pivotal Egyptian role in the region as a pillar of security and stability.

Wook asserted the importance of working to promote the military and security, expressing Korean interest in increasing its investments in major development and infrastructure projects in Egypt.

Both officials discussed ways to enhance military and security cooperation between the two countries, especially with regard to cooperation in joint manufacturing, transfer and localization of technology.

In this context, the South Korean Defense Minister commended the rapid intervention and effective mediation carried out by Egypt, led by President Sisi, to calm the situation in the Gaza Strip and contain the escalation between the Palestinian and Israeli sides, as well as the initiative to rebuild Gaza.

The meeting was attended by Egyptian Minister of Defense Mohamed Zaki and Ambassador of South Korea in Cairo Hong Jin-Wook.