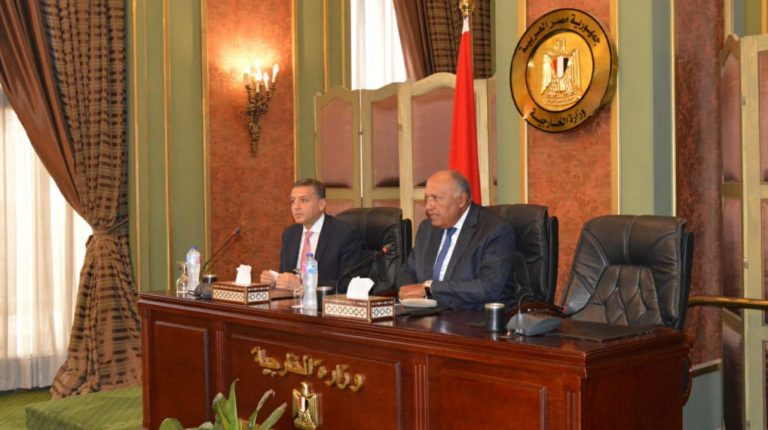 Egypt’s Minister of Foreign Affairs Sameh Shoukry met, on Wednesday, with the country’s new ambassadors ahead of their departure to serve as heads of diplomatic missions abroad.

Shoukry called on the ambassadors to make every effort to represent Egypt in the best way, and to continue implementing the priorities of the Egyptian foreign policy.

Shoukry stressed the need for ambassadors to abide by the determinants of Egyptian policy and its approach that seeks to preserve national security, defend the higher interests of the Egyptian state, and care and serve  the Egyptian citizens abroad.

The Minister of Foreign Affairs stressed the importance of the heads of the missions abroad to continue making all efforts to promote the unprecedented economic and development boom that the Egyptian state is witnessing.

Shoukry called for the promotion of the national programs implemented by the Egyptian government aimed at improving the standard of living of citizens, developing their capabilities and skills, expanding the realization of community protection and providing decent livelihoods.

Shoukry also stressed that these achievements require continued tireless work by the Ministry of Foreign Affairs and its members to support the pillars of the new country by strengthening our relations with friendly and brotherly countries.

He pointed to the need to deal effectively with the challenges and crises in the regional and international environment, and the implementation of an effective and successful foreign policy in its tools and the intensification of diplomatic action at the bilateral and multilateral levels.

Shoukry demanded that embassies and consular missions abroad continue to make every possible effort to follow up on consular problems and issues and to provide various means of consular care for Egyptian citizens residing abroad.