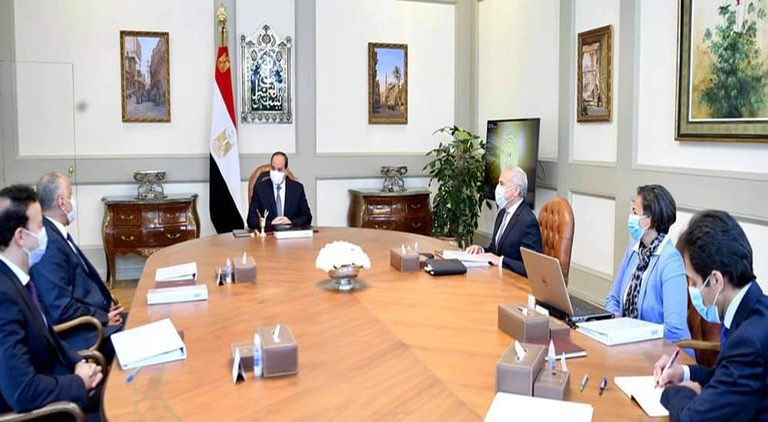 Egyptian President Abdel Fattah Al-Sisi met, on Sunday, with some officials from the Central Bank of Egypt (CBE), where he directed the institution to launch a new mortgage finance programme with a 3% interest rate.

A review was undertaken of the CBE’s activities as part of the state’s monetary and financial system.

The new mortgage financing programme is directed at low- and middle-income Egyptians to support their ability to own housing units, through long-term loans of up to 30 years with low interest that does not exceed 3%.

For his part, Amer presented the CBE’s efforts in the past period, especially during the novel coronavirus (COVID-19) pandemic.

He stressed that the current situation regarding foreign cash reserves is strong and safe, which has led to a stability of exchange rates and the achievement of proper liquidity in foreign exchange.

Amer said that this improvement has allowed Egypt to overcome the repercussions of pandemic. President Al-Sisi praised the CBE’s performance in this context, with the latter’s efforts in line with all government institutions and the state’s economic interest.

Additionally, the meeting handled the results of the presidential initiative that was launched in 2015 for micro, small and medium sized enterprises (MSMEs). The total volume of financing for these enterprises amounted to about EGP 234bn, with 1.260 million commercial and industrial establishments benefiting from the initiative. It contributed to providing about one million job opportunities.

Accordingly, the President has instructed for an increase of an additional EGP 117bn to this funding in the current and next year.

Amer presented the CBE’s efforts to develop and restructure the Agricultural Bank of Egypt (ABE). This came in addition to the support for 320,000 farmers who found their debts written off, which amounted to about EGP 660m.

Besides this, the CBE allocated EGP 2.5bn to developing livestock projects that included hundreds of thousands of animal heads, in addition to EGP 3bn for the National Veal Project.

The President was also briefed on the CBE’s efforts regarding financial inclusion, in addition to the savings and loan group project. A large number of women have benefited from the latter project.

Al-Sisi had directed for this vital project to be developed, and for the maximisation of its financial resources to increase the numbers of its beneficiaries.

Efforts to develop the e-payment system for government collections were also presented, in cooperation with the Ministry of Finance. This amounted to nearby EGP 550bn in fiscal year (FY) 2019/20, through the diverse network of the e-payment collection system and the new Meeza cards, which amounted to about 23 million different cards in cooperation with all government agencies.

Banks would have to face winds of changes, modernize their technology infrastructure: CIB Chairperson

AIH to split into 2 separate holding companies by Q1 2022