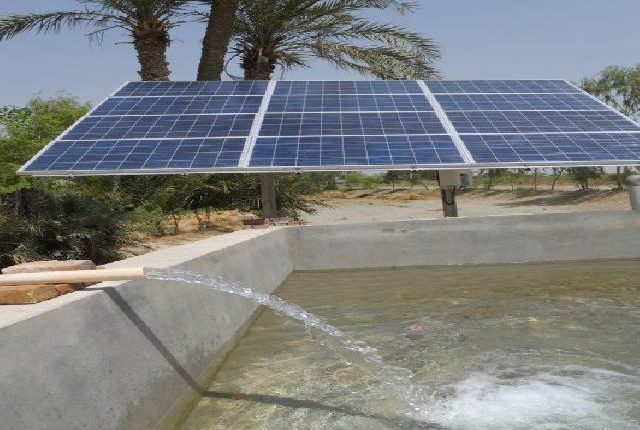 The use of solar energy in the Arab region offers investment opportunities in various areas, including its usage in waste recycling plants, provision of electricity, groundwater pumping stations, and irrigation norias in a number of North African countries, including Egypt and Tunisia.

In a workshop held on the side-lines of the second edition of the annual Cairo Water Week, the United Nations Food and Agriculture Organization (FAO), in cooperation with the Egyptian Ministry of Irrigation, organised a session to discuss one of FAO’s irrigation projects based on the use of solar energy in Egypt and Tunisia.

During the workshop, Egyptian Farmer from Assiut governorate, Essam Hashim, briefly presented his experience in installing a solar irrigation station. With the assistance of the project, he had conducted feasibility studies for his 130-meter-deep well, where the experiment was a success and  saved a lot of money.

Hashim said that the experience was beneficial to him by up to 85%. His only problem is with technical support and maintenance and asked the ministry to help with.

From Tunisia, Farmer Salim Hezek presented the experience of a pilot project for the use of solar energy in the “Megrine” area of ​​Tunisia, which sells surplus power generated from the plants to the state electricity or the distribution company, to benefit the owners of the electricity for free.

The pilot project consists of a pumping station equipped with solar energy with a total capacity of 40 kilowatts (kW), irrigating 40 hectares of fruit trees such as olives, figs, and plums, in addition to a water tank with a capacity of 100 cubic metres (cm). The station operates for seven hours a day, three days a week.

The project which lasted for almost a year, has reduced water consumption by 30% and halved the price of electricity.

Regarding the experience of the Egyptian Ministry of  Water Resources and Irrigation,  Deputy Minister Ragab Abdel Azim, said that they have started to implement the use of solar energy for irrigation in underground wells instead of diesel in the past two years.

The project initially started in the New Valley governorate with a three-year plan to make all the wells of the governorate solar-powered. It was also implemented in the Delta governorates to operate irrigation systems using solar energy, and use the energy in a number of government buildings.

Regarding the dangers of using solar energy with regard to excessive use and depletion of underground reserves, Abdel Azim denies any dangers. He explains that the solar panels that are installed work for only seven hours a day in the duration of solar brightness. Thus, they reduce the number of pumping hours from 12 hours or more in case of using diesel to seven hours only because the panels do not store energy to use at night since it is costly.

On that note, Abdel Azim said assured there is no need to worry about the dangers of excessive pumping of groundwater because the ministry has launched awareness campaigns for users of this technology that explains the dangers of overuse of water in irrigation on the crop itself and on the strategic groundwater reserves.

“The characteristics of solar wells in the Bahariya Oasis have improved and the water level in the well has increased as a result of reducing the number of hours of water withdrawal,” added Abdel Azim.

With regards to ensuring the compliance of farmers with the ministry’s guidelines of use and quantities, Abdel Azim explained that the groundwater in Egypt is limited and non-renewable., and accordingly there is a need for the government to determine the proper amount of water to be used. It will also be implementing punishments for those who exceed the quantity of groundwater permissible.

Abdel Azim further explained that this is done through remote monitoring of wells after the installation of  meters on each one to monitor the quantities of pumping. “Even if the user increased the number of hours of operating the well, he will not be able to exceed the amount of water allowed to be pumped,” he stressed.

The tele-metric monitoring system recently implemented by the ministry allows remote shutdown of the solar power plant that operates the well. The system is highly accurate to avoid data collection errors by conventional methods and reduce both the chances of human error and expenses. It will also help in making decisions.

Egypt continues to be EBRD’s success story in SEMED