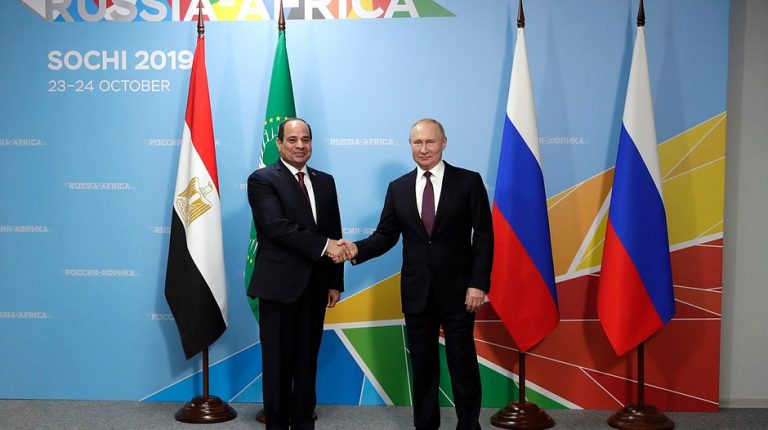 It came during his speech in the inaugural of Afro-Russian Economic Forum in the Russian southern resort city of Sochi. Al-Sisi added that the forum is a platform to offer various investment and trade opportunities between Moscow and Africa.

“This will hopefully enhance the interdependence and communication between our peoples, contribute to the development of the African continent in accordance with the vision of the African Union Development Agenda 2063,” said Al-Sisi.

The two-day summit is co-led by Russian President Vladimir Putin and President Al-Sisi, the current chair of the African Union. Leaders of all the 54 African countries have been invited to the summit.

“The aspirations of our peoples should push us all together to realise their legitimate hopes and aspirations for peace, stability, economic progress and development. We must also benefit from successful economic experiences, especially the Russian experience, which reflects a solid will and ability to work and accomplish,” said Al-Sisi.

The president stressed the importance of the forum to contribute to enhancing the capabilities of African countries and achieving its developmental priorities as the continent puts the issues of infrastructure development as a priority.

He noted that 65% of the African population are under 25 years old, which is a powerful force in the future labour market.

“Africa is witnessing significant positive changes with increasing opportunities for trade, investment and entrepreneurship, in which the areas and capabilities of industrialisation and digital transformation are evolving, driven by ambitious young communities and bold and stimulating government policies to achieve the aspirations of the peoples,” said Al-Sisi.

The president highlighted Egypt’s and Africa’s efforts to achieve economic and political reforms such as the signing of the continental free trade zone which was launched in July 2019.

Al-Sisi invited “all private sector companies, Russian and international, and international financial institutions to cooperate and invest in Africa,” saying that this is the perfect time to open up to the continent.

He also called upon the international, continental and regional financial institutions to finance the development efforts in Africa, provide financial guarantees to build the continent’s capacities to promote trade and increase investment, and to provide the best conditions and incentives for projects and development programs of African countries.

Al-Sisi emphasised that cooperation with African countries should be based on the principles of common interest and African ownership within a framework that aims to support inclusive and sustainable development on the African continent.

He explained that this could be achieved through three pillars: accelerating economic transformation and improving the business climate through genuine partnership with the sector; achieving social justice and societal partnership, and boosting peace and stability in accordance with the African vision set out in Agenda 2063 and the UN Sustainable Development Goals 2030.

On the sidelines of the summit, Al-Sisi separately met with Putin. The meeting addressed issues in mutual interest including the Syrian and Libyan crises, as well as the Palestinian cause.

During the first day of the summit, Putin said that the United Arab Emirates (UAE) expressed interest in participating in joint projects of Russia and Egypt in the production sector.

“We are working very actively in these areas. We want to invest $190m in infrastructure development and attract up to $7bn [foreign investments],” Putin said.

“By the way, I recently visited our common friends in the United Arab Emirates. They are very interested in this joint project of ours and will also think about how they could fit into our joint development plans in the production sector,” he said.

Putin added that his country’s relations with Egypt have developed positively as the last year trade turnover grew by 14%, reaching $7.7bn, pointing out to the mass Russian projects in Egypt, including the nuclear power plant and the industrial zone in the Suez Canal Economic Zone.