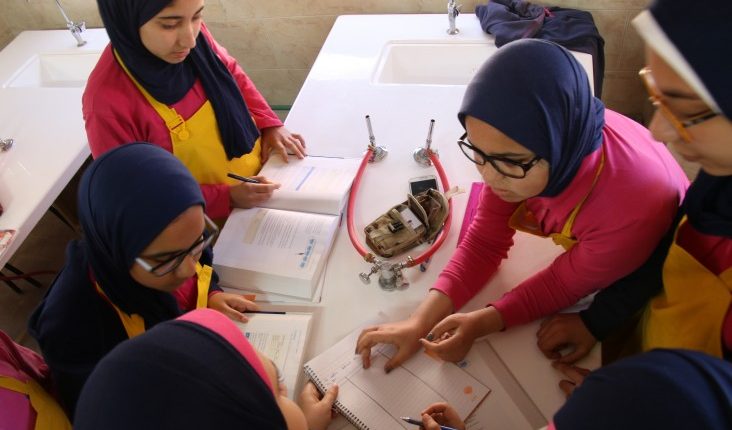 The United States Agency for International Development (USAID) is in close consultation with the Egyptian authorities for implementing new projects, Mission Director of the USAID in Egypt Sherry Carlin told Daily News Egypt during the American Chamber of Commerce (AmCham)’s event last Thursday.

“We have 13 ministries as partners and we will continue to implement developmental projects for the good of the Egyptian people,” Carlin added, noting that the USAID’s programmes in education, health, economic growth, and governance are contributing to the stability and prosperity for the Egyptians, through accessible, effective, and countable institutions.

USAID’s programmes are giving future generations the tools to succeed and providing opportunities for Egypt’s large youth population as they enter higher education and the workforce, she pointed out. Besides, the USAID is improving agriculture and water productivity and enhancing livelihoods in rural areas where poverty and unemployment exist, she added.

“We seek to enhance the contributions of government officials, civil society, communities, and individual to build and strengthen institutions that meet the political and economic needs of the Egyptian people,” Carlin asserted.

USAID’s programmes in Egypt amount to over $30bn since 1978, according its recent report, “40 years of inspiring Egyptian success”, noting that it has directly and fundamentally supported gains such as a reduction in infants and maternal mortality rates, improvement of reading ability in the early grades, and an increase in marketable skills. 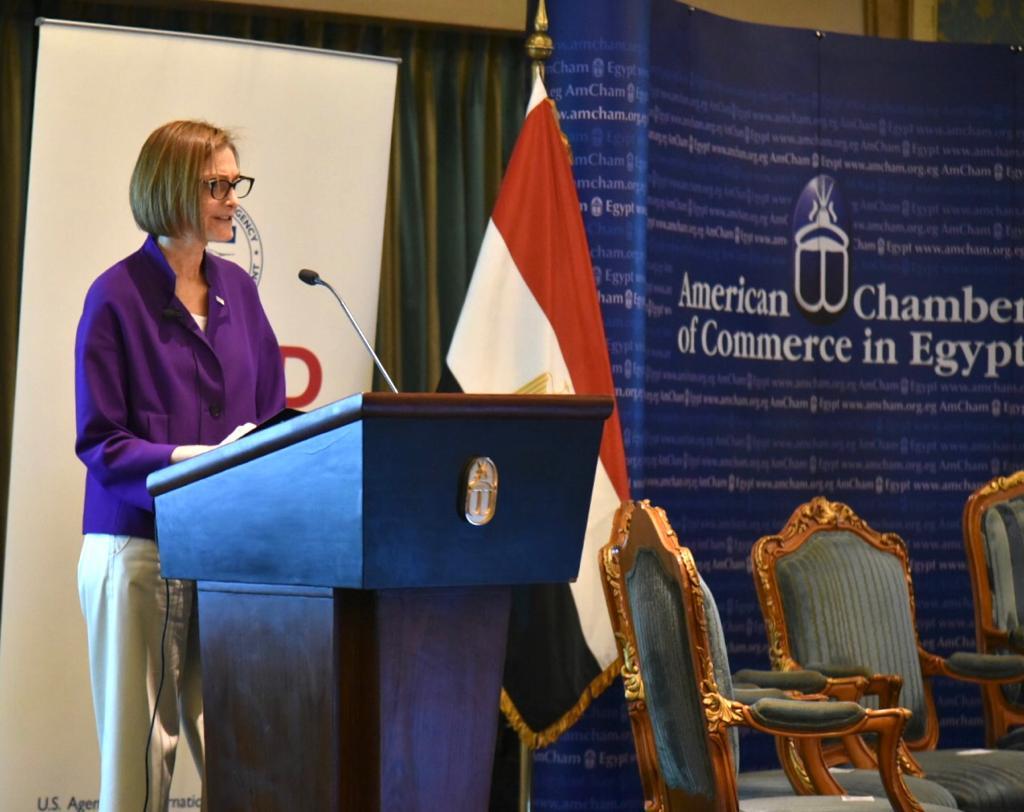 Economic growth is a key area of USAID activities

USAID works with public and private sector partners to create more and better jobs especially in the labour-intensive agriculture and tourism sector, the report stated, explaining that USAID’s programmes improve the policy and business regulatory environment, stimulate entrepreneurship, and boost enterprises which improve the employment of Egypt’s youth and provide support and financing for micro, small, and medium enterprises.

The report also referred to the USAID’s role in advancing women’s economic empowerment through facilitating increased employment opportunities and working with businesses to adopt gender-balanced policies. They also provide training and expertise to increase the exporting capacities of small and medium enterprises (SMEs) to expand export markets, buyer contacts, and sales.

With regards to the tourism sector, USAID works with international and local organisations to conserve Egypt’s rich cultural and natural heritage which increase both skills and employment, the report mentioned.

Since 1978, the USAID has provided more than $1.4bn to Egypt’s agriculture sector, according to the USAID’s report, stating that the US government’s global initiative ‘Feed the Future’ encourages free-market competition and helps match farmers with local and international buyers to meet market needs and consumer demands.

Agriculture is a major component of the Egyptian economy, contributing 14.5% of the GDP while the sector accounts for 28% of all jobs. Over 55% of employment in Upper Egypt is agriculture-related.

Workforce development and women’s empowerment are essential to ensure the sustainability of USAID efforts in the agriculture sector, the report said, adding that the USAID is working with agricultural technical schools, universities, and research institutions to strengthen the quality of education and creating jobs.

This programme increases agriculture-related incomes of 14000 farmers by strengthening sustainable fruit and vegetable value chains for domestic and export markets. It also incorporates innovative technologies in small-scale cold storage infrastructure and irrigation, in addition to working with farmers on production, post-harvest process, marketing and nutrition. The program started in July 2015 and will be finished in June 2020.

This programme, which started in August 2018 and is planned to be finished in December 2023, helps farmers in Upper Egypt and the Delta to become self-reliant and grow marketable crops that meet international standards for export.

The third current programme of the USAID agricultural activities in Egypt is “Evaluating Impact and Building Capacity” which generates evidence that informs policy and programme design implementation. These evaluations show the direct link between agriculture, health, and nutrition.

The total cost of this five-year programme which will end on June 2020, is $5.5m, the report stated.

Upon the Egyptian government’s request. The USAID is strengthening public financial management and public investment planning through its “Macroeconomic Stabilisation and Reform” programme in partnership with Ministries of Finance and Planning, Monitoring, and Administrative Reform.

The USAID is providing training and capacity building to improve fiscal management, budgeting, and expenditure control as well as to promote greater budget efficiency, transparency, and accountability, the report noted.

This programme started in April 2018 and will be finalised in the same month of 2023 with a total cost of $22.66m, the report clarified.

The USAID is collaborating with the Ministry of Education and Technical Education to improve technical secondary education through its programme “Workforce Improvement and Skills Enhancement” with a total cost of $24.6m.

This programme that started in November 2015, will be finalised by end of this month, targeting 11 governorates including, Alexandria, Aswan, Beni Suef, Damietta, Fayoum, Gharbeya, Ismailia, Menoufia, Port Said, Red Sea, and Sharqeya.

The USAID is also supporting the development of entrepreneurship among youth and promotes the growth and competitiveness of micro, small, and medium-sized enterprises (MSMEs) by improving access to high quality public and private services with a cost estimated at $22.9m, through its programme “Strengthening Entrepreneurship and Enterprise Development”.

The USAID is also promoting Egypt’s trade and investment sector through the “Egyptian American Enterprise Fund” which aims at promoting financial inclusion and job creation. Its total estimated cost is at $300m from March 2013 to December 2026.

Through its programme, “Enhancing the US-Egypt Commercial Trade and Investment Relationship”, the USAID is supporting legal and trade-related technical assistance to the government of Egypt, promoting private sector investments. This programme will last from December 2018 to December 2020 with a total cost of $975,000.

USAID provided over $100m in assistance to conserve Egypt’s antiquities

Over $100m were provided by the USAID to assist Egypt in the conservation of its antiquities, according to the report, adding that it is currently implementing three programmes in the antiquities field, including the project “Rediscovering Esna’s Cultural Heritage Assets”.

The report mentioned that 25 million Egyptians benefited from the USAID’s $3.5bn investments in Egypt’s water and sanitation sector, noting that it helped the government of Egypt establish the Holding Company for Water and Wastewater, a water regulator and a national umbrella to standardize and govern local water utility companies.

The USAID supports the Egyptian government restructure tariffs and help water companies come closer to achieving cost recovery for operations and maintenance, according to the report. It added that the USAID continues to support the Egyptian government to increase access to clean water and sanitation services in underserved rural areas where citizens suffer from unreliable and low-quality potable water and few wastewater connections.

The USAID is currently involved in three projects in Egypt’s water sector, including the project “Water Utilities Management” with $30m cost to improve access to water and sanitation services. The programme started in October 2014 and will end on September 2020, targeting four governorates; Assiut, Beni Suef, Luxor and Sohag.

The second programme is the “North Sinai Initiative” with $50m to increase access to potable water and improve sanitation for residents of Sinai. This programme started in October 2014 and will last to June 2020. By September 2019, the programme provided direct potable water access to 300,000 of the 450,000 people living in North Sinai.

The third current programme in water area is Construction Monitoring and Engineering Services Support (CMESS). This activity provides technical and oversight support to USAID’s staff in monitoring, implementing and finalising projects procured and managed by the Egyptian government. This programme will wrap up in September 2020 after beginning in July 2015 with a total cost of $1.5m.

With more than 18 million students, Egypt is home of the largest school system in the Middle East, where boys and girls attend schools at nearly equal rates.

The USAID helped establish Egypt’s first two Science, Technology, Engineering and Mathematics (STEM) schools in 2011 and 2012. Their success encouraged the Ministry of Education to expand its model to 12 additional schools while still maintaining their high quality.

The USAID is working to eliminate illiteracy among Egypt’s most vulnerable populations using an innovative and intergenerational literacy approach for mothers and their primary school-aged children, in community schools in some of Egypt’s most rural regions, the report stated.

For nearly 40 years, USAID has worked with the Egyptian people to improve healthy behaviours. Egypt’s health challenges disproportionately affect the rural poor and have the potential to impact the country’s economic prosperity more broadly over the long term.

The USAID’s programmes improve health behaviours, enhance the quality of health services, and help the Egyptian government guide policy and programme design by supporting research and monitoring in key areas such as nutrition and infectious disease.

The USAID’s health programmes in Egypt place particular emphasis on poor and underserved populations, including women and youth, in addition to geographical areas where there are health disparities. It also aims to address gender inequalities in the health sector.

To improve health and promote a stronger workforce, key areas of intervention include; maternal, neonatal, and child health and nutrition; emerging and infectious disease detection and response; health communication; and support for research to improve information on key health topics.

The USAID works with key government institutions to support Egyptian-led governance and rule of law reforms. These reforms are improving the delivery of essential public services and increase citizens’ ability to participate in the national decision-making processes.

“Safe Cities Free of Violence Against Women and Girls” is one of the USAID’s important projects in governance areas, initially working to combat sexual harassment in public.

As a result of its success both at the community level and in promoting legislation to combat sexual violence, its scope has expanded to include support mechanisms for survivors of violence against women.

This programme was implemented in cooperation with the UN Women from October 2013 for September 2019, with a total estimated cost of $7m.

“Promoting Civic Education among Youth in North Sinai” programme is also one of the USAID’s key programmes. It builds a culture of civic participation and volunteerism among youth in conflict-affected North Sinai through high-impact civic education.

This programme helped provide youth with an alternate way to improve their communities, training 2,200 youth to exercise their political rights at the community-level through their tribal government or school elections. Besides, 2,400 grassroots community leaders participated in workshops on the importance of including youth in community decision-making.

Ride-hailing apps: safe haven for Egyptian women from harassment, yet they come with hefty price tag