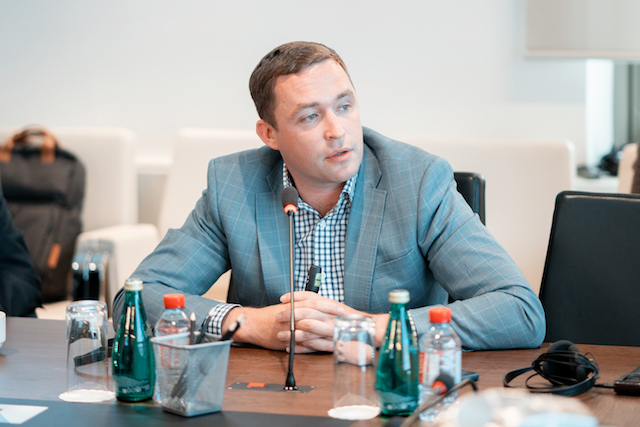 St Petersburg- As one of the world’s top 10 public companies in terms of proven hydrocarbon reserves, Russia’s Gazprom Neft, which sells its products in more than 50 countries worldwide, is facing several challenges. The company has updated its strategy, and now it is looking to become the world’s benchmark in operational efficiency.

Daily News Egypt sat with Boris Belozerov, Head of Digital Technologies and Geological Expertise Department of Gazprom Neft Science and Technology Centre, to speak about the challenges the company is facing in harsh environments such as the Arctic.

The company, which takes Saint Petersburg as its technological capital, has good technological ties with several Arab countries, such as Saudi Arabia, Kuwait, and the UAE. Gazprom Neft develops the Badra oil field in eastern Iraq and is engaged in geological exploration in Iraq’s Kurdistan Region.

Belozerov told DNE that the main challenge of the company’s work currently is the dramatic decline of the oil reserves’ quality and the climate change in areas where the company is operating. He explained that most of the company’s reserves are located near Arctic regions and the quality of the reserves there is decreased over 10 times compared to the last 20 years.

He clarified that this decrease in quality of reserves makes it difficult for the company to sustain production and operate at the same level of the past 20 years.

Answering to DNE’s question about how his company deals with these challenges, Belozerov said “We have several streams for that, one of them is the technology strategy. In the last four years, we established the technology strategies for upstream which cover nine main directions, such as exploration, production, optimisation, reservoir engineering, digital oil fields, and construction in harsh environments.”

He added further that the company has the technology roadmaps for these things which are very closely related to the main problems. Also, Gazprom Neft has the innovation direction, also called science engineering, that is trying to find new solutions–not just to adopt present technology but to produce something new which we can test in a laboratory and implement in the field.

“For the second direction of the digital transformation of the company, we brought the implementation of digital technology in our company upstream and downstream. The third part is the constant improvement of the operational efficiency which is about changing the organisational system of the company, changing business processes, and so on.  All of these three streams support the improvement of our company,” he said.

Regarding Gazprom Neft’s work on the Arctic environment and how that can affect that sensitive ecosystem, Belozerov said that the environment issue has the same priority as the business goals of their projects. “In this point of view, we understand that if we will have environmental problems, then this is a high risk to our company before the global market and the holders of stocks,” he noted.

“We also use special materials for our work in the Arctic. Not long ago, we opened one of extreme north oil terminals in a peninsula in the Arctic area, and we invested in marine pathways from the Russian peninsula to the northern European part,” he added.

Additionally, Gazprom Neft constructed one of the best icebreakers which is also environmentally friendly, according to Belozerov.

“We also support the populations of the Arctic environment, and we have some expeditions to analyse the Arctic species and support them,” he noted.

At the end of 2018, the company has updated its strategy and now it has a 2030 strategy, which is mostly related to increasing its operational efficiency, and raising the amount of the produced hydrocarbons, Belozerov said.