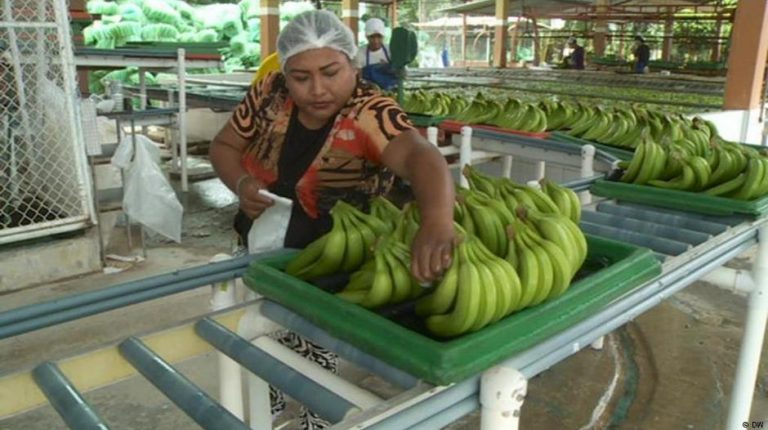 Ecuador is the world’s largest exporter of bananas. The fruit plays just as big a role as oil for the country’s economy and its fight against poverty. Some German discounters seem to care little about that.According to online portal worldstopexports.com, Latin America and the Caribbean accounted for the highest dollar value worth of banana exports in 2017 via shipments, totaling $7.2 billion (€6.4 billion) in sales. Figures for 2018 full-year sales are not yet available.

Ecuador stood out as the world's largest banana exporter, accounting for $3 billion of overall sales, or 24.6 percent of global sales.

The South American nation has long been out to organize a front of all producing countries in the region to stop German supermarket chain Aldi from exerting unfair pressure on local farmers through its aggressive pricing policy.

Germany's TAZ newspaper reported a week ago that not only Aldi, but also its domestic rivals Netto and Edeka had been selling bananas for under €1 per kilogram, thus making farmers in Ecuador and elsewhere in Latin America suffer.

The managing director of the German nonprofit organization Transfair, Dieter Overath, told DW that Ecuador had actually stopped selling bananas to Aldi, refusing to resume deliveries until a higher price per crate was negotiated. Aldi has not yet responded to a DW request for comment.

Overath emphasized that not all German supermarkets followed Aldi's price reduction. He specifically mentioned Lidl, which had both bio bananas and Fairtrade bananas on offer.

Last fall, Lidl announced it would soon only sell fair-trade bananas in its stores. "We had hoped for a domino effect, for others to follow suit," Overath told the TAZ daily, adding that "it's shocking to see that the opposite is happening, with some discounters paying even less now."

Berlin aware of the issue

According to Fairtrade International, some discounters said they wanted to push the price down to $4.50 per 18-kilogram crate of bananas. It calculated that only a price of at least $9.45 per crate would give local farmers decent wages and training and enable them to adhere to modern ecological standards.

The aggressive pricing strategy of Aldi and a few other discounters in Germany has meanwhile drawn the ire of German Development Minister Gerd Müller, who is expected to travel to Latin America, including Ecuador, in a couple of weeks to address the issue with local players.

In the opinion of Transfair and Oxfam, another nonprofit organization, it's eventually the customers who can play a decisive role in making Aldi and its competitors reconsider their pricing policy. But that would require consumers to ignore the cheapest bananas and reach for the more expensive ones.