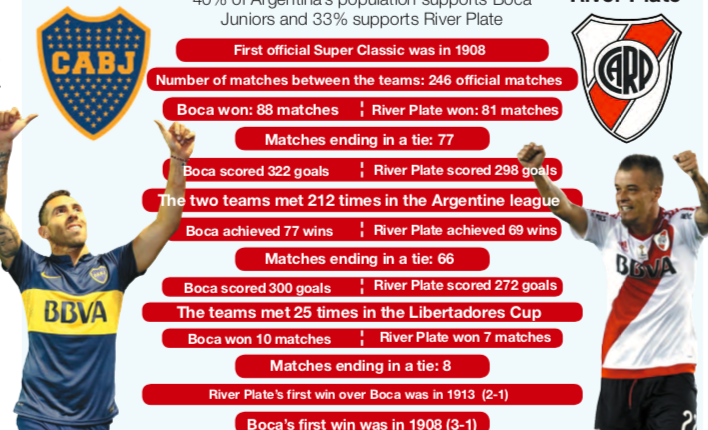 The lovers of Argentinian Super Classic across the world will be watching tonight the awaited clash between Boca Juniors and River Plate that will be played at Real Madrid’s Santiago Bernabeu stadium in the second leg of the Copa Libertadores final.

The South American football’s governing body CONMEBOL chose Bernabeu to host the match after it was postponed twice due to violence incidents that occurred between the fans of two teams at River’s Monumental stadium in Buenos Aires on 23 November.

River Plate fans have attacked the bus of Boca Juniors before they entered the stadium, which caused the injury of some players.

The first leg match ended with a 2-2 draw at Boca’s iconic Bombonera arena, which will make the second leg open for all possibilities.

The star of Boca Juniors, Carlos Tevez, who spent most of his football career in Europe, is looking forward to achieve triumph at the country of Tango so as to participate in the upcoming FIFA Club World Cup in the UAE.

Tevez,34, hinted that he will retire next year, and beating River Plate can be the perfect end for his football journey. “I do not think there is anything I still have to win. I have turned my dream into a reality, and this match is certainly the most important I will play in my entire career,” he said.

The Argentinian capital, Buenos Aires, will follow the game with great interest and passion as streets will be empty and everyone will sit in front of TVs to watch the super clash.

The last match between both teams was in 2015 when the fans of Boca attacked the players of River Plate with pepper spray which led to the cancellation of the game and eliminating Boca from the league.

Before the two teams were qualified to the final, the Argentinian President Mauricio Macri said that he did not want to see both in the final, according to a previous TV interview. “I would rather see a Brazilian team getting to the finale with an Argentinian team”.

Macri headed Boca Juniors between 1995 and 2007, before he delved into politics.