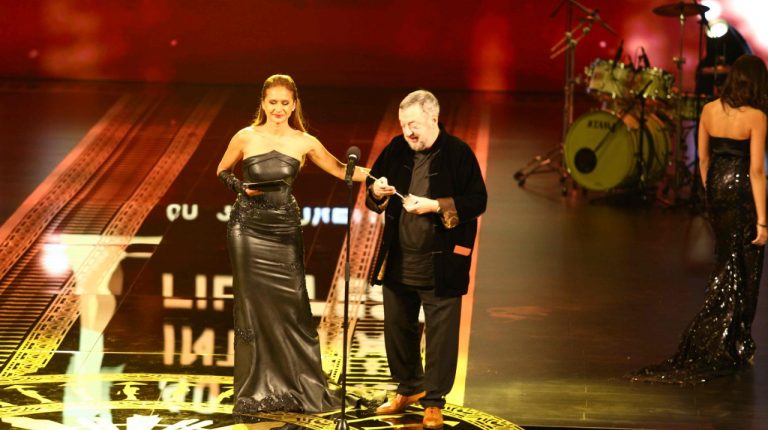 The Cairo International Film Festival kicked off its 40th edition at the main hall of the Cairo Opera House on Wednesday, in attendance of Egyptian and international film stars.

The ceremony which kicked off with the Egyptian national anthem featured a short promotional documentary film about the beginning of the seventh art in Egypt’s beautiful city of Alexandria. The film tells the story of how Alexandria was one of first cities to host cinema houses, and how later Egypt became the home to several prominent filmmakers.

The film recounted the year 1927, when a prominent Egyptian economist Talaat Harb established Studio Misr, which produced dozens of Egyptian films, many of which we now call “classics.”

Introducing the ceremony was veteran actor and monologist Samir Sabry, who hosted the very first edition of the Cairo International Film Festival. “Whoever loves cinema once, will continue to love it even if 100 million years pass by,” Sabry told the audience.

Egyptian Producer and President of the Cairo International Film Festival, Mohamed Hefzy, addressed the audience and welcomed the government officials who were present at the ceremony.

Hefzy called upon the audience to attend the programmes and the different screenings, announcing the inauguration of the Audience Award which give $20,000 to the winner.

He also honoured the prominent film critic Youssef Cherif Rizkallah, the festival’s artistic director. Hefzy described Rizkallah as “a person who made several Egyptians interested in cinema through his analysis of films and his interviews on television.”

“This 40th edition means we are looking back at the past, as well as towards the future, to see what we can offer to the festival’s development and enhancement,” Hefzy said, who invited Egyptian Culture Minister Ines Abdel-Dayem to inaugurate the festival.

Describing Cairo as the “Hollywood of the East and the capital of Arab Cinema,” the minister welcomed the festival guests, adding that the cinema is a powerful tool for people around the world, allowing them to talk to each other.

“Welcome to your second home, the usual destination that embraces all the talents in all disciplines, and treats them with warmth, friendliness, and kindness, in return for love and respect,” Abdel-Dayem said.