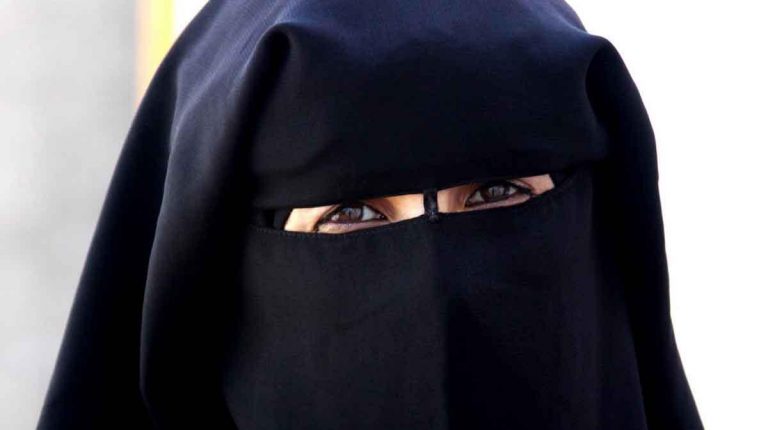 Days ago, a member of the parliament (MP) called Ghada Al-Agamy, suggested drafting a bill, stipulating banning Egyptian females from wearing the full-face cover, known as the Niqab, in the public places.

MP Ghada Al-Agamy declared that whoever opposes the ban, will pay a fine not less than EGP1,000, which could increase if it is repeated.

Al-Agamy’s justification for this suggestion, was due to the security conditions that Egypt is currently experience, according to her televised interviews.

“Niqab banning is an urgent demand, especially after it became clear that terrorists use it to hide from security forces,” Al-Agamy stated.

She also revealed that the bill is supported by 60 other parliament members, noting that it will be presented to the committee of constitutional and legislative affairs for discussion.

Some people think that this bill is a type of discriminatory practice against Niqab-donning females, and that it is a violation of women’s personal freedom. Meanwhile, others see that this law has been long-overdue for years, and that it is crucial in the battle against terrorism.

On the other hand, this drafted bill erupted the emanation of countless queries. They included if it was necessary to ban the Niqab, in order to maintain the country’s security?; is the Niqab really considered a threatening aspect to people’s security in Egypt?; if this drafted bill is approved, what will Al-Azhar institution’s opinion be from a religious point of view, as well as is this bill considered a violation of personal freedom?

Daily News Egypt (DNE) interviewed several experts to try to uncover some answers to these questions.

Is the Niqab considered a threat to national security?

Hossam Sweilam, security expert, told DNE that from a security perspective, it is crucial to bare both the hands and the face in order to determine a person’s identity and gender

“We have seen several male terrorists hiding under the Niqab, committing sexual and terrorist crimes,” he noted.

Sweilam determined that the Niqab is a aberration of the Islamic religion, attesting that “the wives of Prophet Mohamed used to show their hands and faces”, insisting that banning the Niqab is a must.

He thinks that the Niqab affords an excuse to commit immoral and religious crimes under it.

Meanwhile, Fouad Allam, a former official at the National Security Apparatus, told DNE that implementing this bill will be difficult as it will be followed by negative responses on both levels, domestically, and internationally.

Allam elaborated that the Niqab is considered a social problem in the first place, but maybe it has a political side, thus he thinks that this ‘phenomenon’,” should be fought through community dialogue rather than by implementing a law, ascertaining that it is therefore possible to achieve this goal in a completely different manner apart from drafting a law.

Allam provided an example which was that the public opinion influencers and the religious experts must preach in mosques, seminars and conferences, in order to convey to different female categories the juristic view of that topic.

“The Niqab is a phenomenon with numerous disadvantages, the most intrinsic one being crime, so Egypt must dispute this idea by socially prior to legal measures,” he summarised.

If this draft bill is approved, what will Al-Azhar’s opinion be?

Relative to the religious context, Oweida Othman, the secretary general of the House of Fatwa (fatwa in the Islamic faith is a nonbinding but authoritative legal opinion or learned interpretation that the Sheikhul Islam, a qualified jurist or mufti, can give on issues pertaining to the Islamic law) in Egypt’s Dar al-Ifta, stated a year ago, that the legitimate dress required for Muslim women is any dress that does not reveal the body, but instead covers the entire body except for both the face and hands, stressing that the Niqab is an Arab habit, and not obligatory for women.

For his part, Ahmed Zaria, Al-Azhar University’s spokesperson, told DNE that wearing the Niqab is not obligatory in the Islamic religion, meanwhile indicating that Muslim females will not be punished if they don’t wear it, but, on the other hand, if they do wear it, they will be rewarded.

In terms of the drafted bill, Zaria stated that implementing this bill is incompatible with Egypt’s constitution, which gives citizens the freedom of decision, in a manner that does not hinder public freedoms.

“I think that if this bill is approved, it may very well be challenged,” he stressed.

Al-Azhar University’s spokesperson called for prudent consideration of this bill before implementing it, and conducting a community-based dialogue, with the aim of reaching the right decision most suitable for all Egyptians, and not only for a certain category.

He pointed out that the decision to ban the Niqab was previously rejected by several European courts, justifying their refusal by declaring that banning the Niqab goes against human freedom, and the freedom of choice and so on.

Noteworthy, since the announcement of this draft bill, the Salafi group started blogging on social media via hashtags such as #SupportNiqab, and #EgyptwillnotbanNiqab.

The bloggings of the Salafi group ranged between legitimate responses according to the Salafis understanding to the Niqab, and hyperbole characterisations of the case as a war against Islam.

Is banning the Niqab a violation of women’s rights and freedoms?

Director of justice programme in the Centre for Egyptian women, Gawaher Al-Taher, informed DNE that she completely refused this drafted bill, as wearing the Niqab or not wearing it is a personal choice and a freedom, explaining that banning it is considered a type of discriminatory practice against women.

Commenting on the justification of maintaining the country’s national security, she suggested having a female security officials in everywhere, who could confirm the identity of the Niqab-wearing women before entering any institution.

“Banning the Niqab is not an impartial necessity for national security, but rather a discriminatory action,” she determined, noting that Egypt`s constitution stipulates no discrimination between people.

“Have all of Egypt’s problems have been solved, and the remaining problem that is still on hand is the Niqab?,” she wondered.

Al-Taher stated that she never heard of any terrorist crimes committed by a man wearing the Niqab.

Finally, Al-Taher was positive that this bill will not be approved as it is considered as unconstitutional law.an

Disagreeing with Al-Taher, Farida Al-Nakash, a journalist and a women’s advocate, said that the Niqab is considered a danger to society, explaining that there are known and recorded incidents when men disguised themselves under the Niqab to commit crimes.

“Therefore, I am in total agreement of completely banning the Niqab, hoping that society—especially the political collective—accepts this ban, viewing it as an notion of a social liberty and not as a violation of personal privacy or freedoms.”

By asking Al-Nakash about the fast that some people think that this bill is a discriminatory, she asked “in order not to be accused of discriminating against people, shall we allow people to carry weapons in the streets?”

She elaborating by declaring that the Niqab is a form of a weapon, because it hides many facts about a person, such the individual’s gender and whether they are armed or unarmed.

Al-Nakash is certain that banning the Niqab will protect society as well as protect its freedoms.

Between the opinions of Al-Nakash’s and Al-Taher’s, emerges George Ishak’s opinion—a member of the National Council for Human Rights— who believes that it’s a personal freedom to wear whatever one wants, however, in some places and professions, it is a must to ban the Niqab. For example, as a teacher, the most important element in teaching is communicating with children, noting that the best communication method is through facial expressions, which is why banning the Niqab in that profession is a must.

However, he stated that implementing this bill will be difficult as Egypt is still suffering from the presence of regressive intellectual thinking by some people in society.

After answering the above questions, the only remaining question that still needs to be answered, is until when will the Niqab topic be a controversial issue? Whether the bill is implemented or not, the divided opinions concerning this topic remain.

Discourse on banning Niqab reappeared on scene over counter-terrorism rhetoric

The actress and the preacher: victims tasting their own medicine

Cairo University bans ‘religion identity’ in its application and papers

Can social media save girls’ lives?