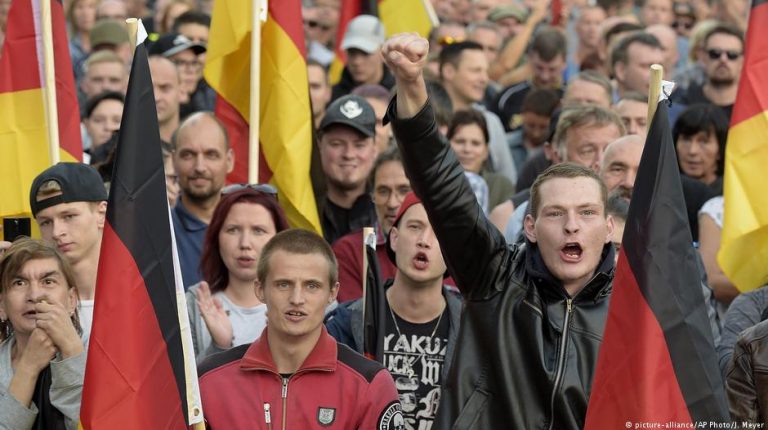 Chemnitz wants to be the European Capital of Culture in 2025. But the recent riots have clouded its reputation. How can culture help the city deal with right-wing extremism, and change perceptions abroad?Following the violent anti-immigrant protests in Chemnitz that were sparked by the fatal stabbing of a 35-year-old German man, thousands of counterdemonstrators came out in an act of defiance against right-wing groups.

On September 3, around 65,000 people from all over Germany attended an anti-racism concert with prominent German bands, and on September 7 about 5,000 people came to an open-air concert of Beethoven’s Ninth Symphony at Chemnitz’s Theaterplatz to protest xenophobia and violence.

Christoph Dittrich, the director of the Chemnitz Theater, spoke with DW about how the city’s cultural scene is confronting the events of the past few weeks.

DW: How much damage has been done to the city’s image in recent days?

Christoph Dittrich: I have to speak bluntly: this has been a huge damage to the city’s image. Perhaps that phrase is not even strong enough. The images of Chemnitz that have gone around the world are already having tangible effects. We’ve heard of companies that don’t want to allow their foreign employees to travel to Chemnitz any longer, of doctors who were about to take up positions in the hospitals and who aren’t coming now.

It’s a terrible situation, quite unlike ordinary daily life in Chemnitz. Our experience here is one of good solidarity and coexistence. The Technical University has the highest percentage of foreign students of all the universities in Saxony. The local industries are hungry for the workers who come here from abroad.

What was your experience after the riots?

Within a few days following the weekend of August 26, an incredible force had sprung up — the motivation not to leave things like this, but to present a different image of the city and really do something for society. For example: making sure the discussion stays open, so people can really articulate their fears and worries, but not of course by rioting on the streets. Standing next to extremists giving the Nazi salute is just completely unacceptable.

It fills us with sadness that someone was killed. The way this crime was then instrumentalized, in such a short space of time, and the fact that it ended up with foreigners being threatened is still a shock and a big worry for the city.

What role does culture have to play in dealing with right-wing extremism?

For one thing, culture is always an appeal to humanity and against racism and extremism — a force inherent in all art. Also, we now have an even greater need for cultural offerings that enable audience participation. That could mean citizen theaters, or specific formats that really facilitate a conversation in the theater’s cultural forum.

What culture can also do is connect people via national and international networks. Straight away, we got so many calls from artist colleagues from all over Germany. That interest underscores the fact this is a task for the whole of society; it’s not only about Chemnitz.

Can you learn from other cities with similar problems?

We can learn a great deal from the experience of Dresden, among others. But we’re not starting from scratch in Chemnitz, either. Take the example of Chemnitz Peace Day, when we commemorate the destruction of the city on March 5, 1945. For many years right-wing extremists tried to misuse the city as a venue for marches on that day. We succeeded in preventing this, thanks to the collaboration of many groups from the fields of sport, education, culture and business. We already have excellent networks here that will now need to be reactivated.

A long time before the rioting in Chemnitz, the city decided to put itself forward to be the European Capital of Culture 2025. How did that come about?

The title of European Capital of Culture isn’t meant to be a beauty contest. It’s much more about strengthening a sense of pride and the experience of cultural coexistence. The city of Chemnitz doesn’t have a baroque town center like Dresden, for example. It was always an industrial town without much prestige. Everything we have here — the opera house, the town hall, the Technical University — they’re all institutions that were created by the will of the citizens.

Despite all the disruptions caused by wars and by the fall of the Berlin Wall, after which 60,000 people left this city and created big gaps that needed to be filled, the people here have always got back on their feet and shaped their city themselves. Emerging from disruption, finding the positive energy to create an open cultural society of their own design — that’s a story we’d like to analyze and continue, one we’d like to tell in Europe.

This interview has been edited for length and clarity.

Blackkklansman: an optimistic defeatism of Racism in modern America