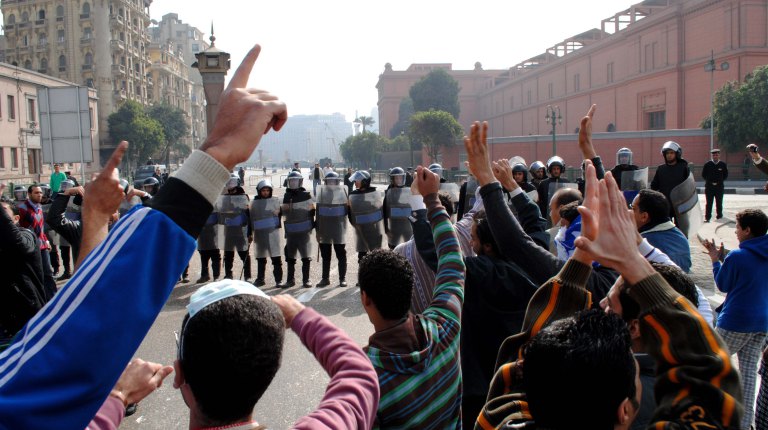 Syrian and Russian fighter jets struck parts of Idlib province on Saturday, Syria’s last rebel stronghold. The airstrikes targeted posts belonging to rebel groups in the northern Hama and southern Idlib provinces, according to the Syrian Observatory for Human Rights.

On Friday, leaders from Turkey, Iran, and Russia agreed that there could be no military solution to the war in Syria. At a summit meeting in the Iranian capital Tehran, the three leaders discussed the latest updates of the situation in Idlib, however the summit witnessed different stances of the three countries.

Russian and Iranian leaders stressed the necessity for all militants to be removed from Idlib and the United States forces to be driven out of Syria, while the Turkish President Recep Tayyip Erdogan called for a ceasefire to avoid a humanitarian catastrophe in a city where about three million people live near to the Syrian-Turkish borders.

Erdogan warned of a bloodbath, saying that any attack against Idlib will result in a disaster, massacre, and a tremendous humanitarian tragedy. “If we can announce a ceasefire today here, I believe this will be one of the most important steps of this summit,” he said.

Russia and Iran rejected Erdogan’s proposal for a ceasefire. Russian President Vladimir Putin said: “we consider it unacceptable when, under the pretext of protecting the civilian population, they want to withdraw terrorists from coming under attack, as well as inflicting damage against Syrian government troops.”

Iranian President Hassan Rouhani said in his speech that his country’s forces’ presence in Syria came following Syrian government’s request. He also stressed the importance of fighting terrorism in Syria.

In a joint statement following the summit, the three leaders called for the creation of safe conditions, whereby Syrian refugees can return to their homes.

The United Nations (UN) envoy for Syria, Staffan de Mistura, said, “all the ingredients for a perfect storm” are in Idlib, calling for the establishment of UN-monitored evacuation corridors for civilians to voluntarily leave the war zone.

“People should be granted safe passage to places of their own choosing if they want to leave temporarily. We must allow the opening of a sufficient number of protected voluntary evacuation routes for civilians in any direction,” De Mistura told the Security Council.

Thousands of people have been killed in Syria since the beginning of the uprising in 2011. The uprising turned to a civil war and the regime of Bashar Al-Assad, the Syrian president, brought forces from Iran and Russia, in addition to the Lebanese Hezbollah militia, to support him against the rebels. On the other hand, hundreds of jihadists from all over the world travelled to Syria to support Syrian rebels and the Syrian Free Army, which is fighting against Al-Assad.

US authorises release of $1.2bn in military aid to Egypt

Fatah-Hamas reconciliation, another round for stagnant situation