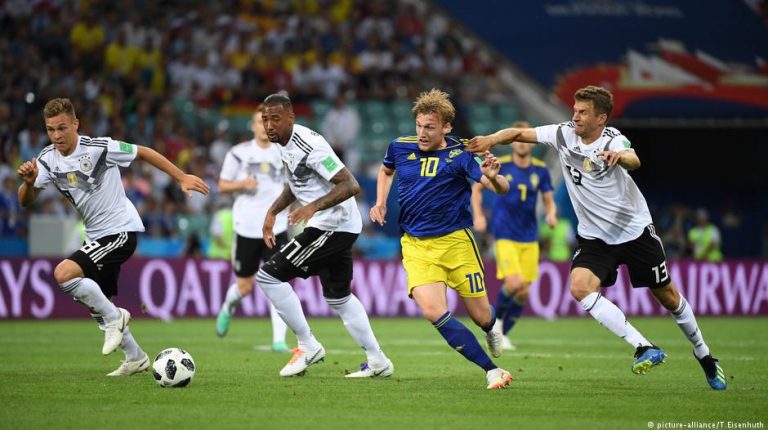 Germany might have beaten Sweden but the manner of victory suggests Germany have evolved into quite an unfamiliar team. Jonathan Harding comments from Sochi.After Saturday night in Sochi, it can no longer be denied. Germany has become a wild team, flying by the quality of individuals and hoping that their occasional flashes of determination will get them through.

A last-minute victory against Sweden cannot paper over the dramatic transformation this Germany team is currently in. Once an organized and structurally superior pass-and-move machine, Germany has become a fits-and-starts team, a spluttering car of an era hoped to have been left behind.

Joachim Löw, a World Cup winning coach, is mirroring his team. Bold team selections, desperate and tardy substitutions and a questionable tactical approach casts even the coolest of coaches in a somewhat unfamiliar light.

This team has twice played the occasion more than the game. Even before the World Cup, Germany showed signs they were becoming a nervy, disconnected and only sporadically dangerous team. In Russia, they have done nothing but confirm it.

Against Sweden, they were saved but not spared. Everything about Germany looks disjointed. Not even a spectacular winner can hide the fact Toni Kroos has turned into the loosest of cannons in Germany midfield. His passing was uncharacteristically poor at times. Defensively Germany still don’t appear to be able to position themselves well and their finishing remains a serious concern.

Perhaps this is how Germany play now. Like a drunk boxer swinging wildly in the dark, hoping to land a devastating blow before suffering too many to their own head. It’s exciting, thrilling even, but not the way this Germany team wants to be.

Their title defense will end very quickly if this mayhem continues, but if it doesn’t then this will be the game when Germany turned a corner. Winning ugly is part of winning a title — remember Algeria in 2014? It will be down to Löw to work his magic once again, but in a very different way to four years ago.