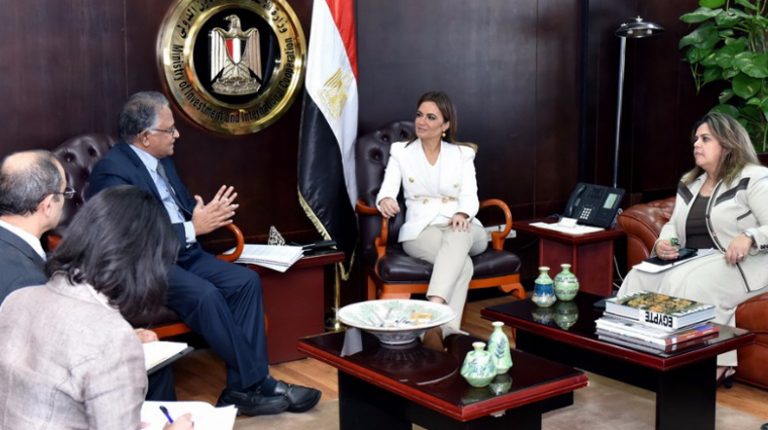 Minister of Investment and International Cooperation Sahar Nasr has discussed with PS Jayaraman, chairperson of the Indian TCI Sanmar Chemicals, increasing the company’s investments in Egypt.

The two sides have discussed increasing Indian investments​ in general over the upcoming period, where Sanmar expressed their desire to increase investments in Egypt, which currently amount to $1.2bn, especially in the field of caustic soda, through injecting $300m, and increasing the production of PVC, from 200,000 metric tonnes (mt) to 400,000 mt, resulting in the largest PVC production in the Middle East. They have also discussed establishing a new factory to produce 135,000 mt of chloride calcium granules, taking total investments to $1.5bn.

The minister welcomed the company’s desire to increase investments in Egypt, stressing that her ministry’s main priority is to take required procedures to create a climate attractive for investors. She called on the private sectors in the two countries to establish economic partnerships between one another to develop cooperation.

Jayaraman praised the facilities provided by the Egyptian government to Indian investors in Egypt, in addition to Egypt’s most distinct advantages for investment, which is its geographical location and manpower.

He explained that his company, which is located in Port Said, is one of the largest investors in the field of chemical industries in Egypt. The company exports 50% of its production abroad. He stressed that his company is committed to expand in order to cover the local demand as well as increase its export capacity while taking eco-friendly measures.

On the other hand, Nasr met with Laura Kansikas, the Finnish ambassador to Egypt. During the meeting, both parties discussed the cooperation relations between the two countries, and agreed to activate economic and technical cooperation between them, especially in the field of education due to Finland’s expertise in the field of primary education.

Sahar Nasr stressed that Egypt is an open market for Finnish investments, noting that the new investment law includes new incentives for investors.

Nasr praised the size of cooperation with Finland, which is most recently represented in a project financed by the Finnish side for 305m to provide four multi-function equipments to be used in the Northern Lakes to purify their waters. The equipments were used to establish the largest fish production farm in East Port Said, with total costs of EGP 275m and production of 85,000 tonnes of fish annually.

Indian TCI Sanmar re-increases its investments in Egypt up to $1.625bn

Nasr meets German ambassador to discuss use of development portfolio

€186m loan from EBRD, EU for developing infrastructure in Fayoum