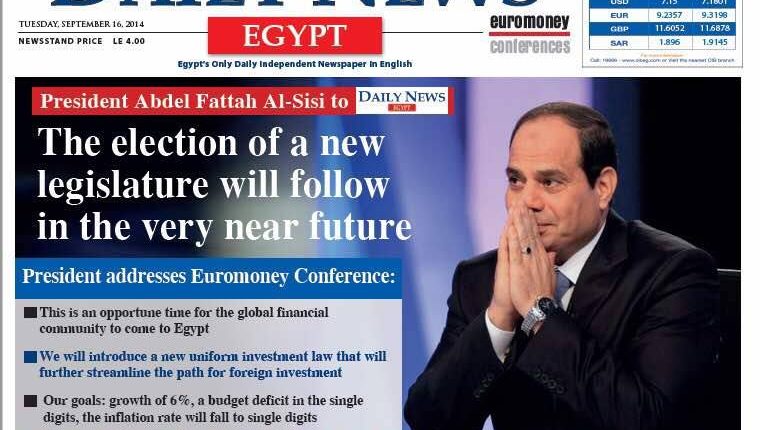 Our two daily newspapers, Al Borsa and Daily NewsEgypt, strongly denounce the government’s persistent crackdown against them. The most recent action taken by the government was blocking the websites of both newspapers—even though their names were not among the list of websites recently blocked. We discovered the blocking with our readers, and it was confirmed by our technical services team.
This incomprehensible and unjustified decision came 10 years after the launch of Al Borsa, when a group of young journalists and professionals decided to invest in establishing it. It was joined five years later by Daily News Egypt.
A Saudi investor has a 50% stake, where he finances and markets this project to offer neutral and professional journalistic services, which are much needed by the Egyptian business community.
The two newspapers filed a memorandum to both the Journalists Syndicate and the Supreme Press Council on Sunday regarding the websites licensed by the Supreme Council of Journalism and that are operating in accordance with the law, both of which have been unjustifiably blocked, without any explanation or prior notification.
We stress that blocking the websites is only one among a series of governmental violations against us, which have been ongoing since November 2016. The violations started when the shares and accounts of Business News, the company issuing the newspapers, were frozen. The funds of former chairperson Moustafa Sakr were placed on receivership without any interrogation or notification. This was followed by a recent escalation, where security individuals barged into our headquarters with the claim of checking the ownership of applications and operating system with which we operate—their main concern, obviously, was to inspect Daily News Egypt’s archive, even though it is readily available on the newspaper’s website.
Regarding these sequential violations, which we do not know when will come to an end, we must restate that all the information about our company, shareholders, financial records, and contracts are available at the possession of the concerned government authorities, in accordance with the law. We have not relieved any non-routine comments over the past 10 years of work. Nevertheless, we are willing to provide this information to any other authorities that request them or require further clarification.
The two newspapers stress that they do not belong to any political or religious factions and that never have they reflected the orientation of a specific group.
In response to these vicious and illegal attacks, the newspapers were keen to follow the legal procedures set forth through filing a grievance before the seizure committee, which has not responded to our official requests since December 2016 to appoint a person to manage the company until payment of the employees’ overdue salaries is completed, as amounts have been seized in the company’s bank account for months. This procedure of appointing a person is followed in all institutions whose assets are seized. We do not consider it logical to receive this kind of treatment, especially with the content we have been publishing during and after the era of the Muslim Brotherhood rule.
Daily News Egypt and Al Borsa have always maintained fixed stances towards the issues of our homeland, security, and destiny.
Al Borsa, which has criticised past regimes’ ways of managing the economic file in Egypt, continued to support the investment climate in Egypt through special issues, specialised supplements, and organised conferences, including international conferences that were largely supported by the Prime Minister and all other ministers for the patriotism they felt our newspaper had.
As for Daily News Egypt, it is the most famous Egyptian “voice” abroad, issued in English—and itself having been privileged with two of President Abdel Fattah Al Sisi’s articles, which were published in 2014 and 2015, about the state’s economic policies as a message to foreign investors taking part in the Euromoney conference. Through the articles, he stressed the importance of our newspaper and its credibility with the Presidency, as well as its effort to carefully examine every person or institution it deals with.
More than 230 persons and their families are greatly affected by the violations against our newspapers. This has seriously impacted their life and may threaten their future, just because they have chosen a profession based on the freedom of expression pledged by the constitution.
The two newspapers stress that they will continue to provide the services its readers are used to expect through print and social media. The websites will also continue to offer their services outside of Egypt, as both are accessible from abroad.
Al Borsa and Daily News Egypt call on all concerned authorities to take on their responsibilities and stop chasing this highly reputable Egyptian investment and which receive great respect from its followers and readers. We stress that we are committed to all investment and journalism practicing laws, and that what is currently happening is negatively impacting the investment climate and the media sector in Egypt.
Topics: Al Borsa business news Daily News Egypt Freedom Investment Mustafa Sakr Press press syndicate

Data journalism necessary to keep up with technology in media revolution

Euromoney Egypt: Back on the investment radar

Decline in quality of voice services in May inside Cairo: NTRA

High prices affect the holy month of Ramadan in Egypt