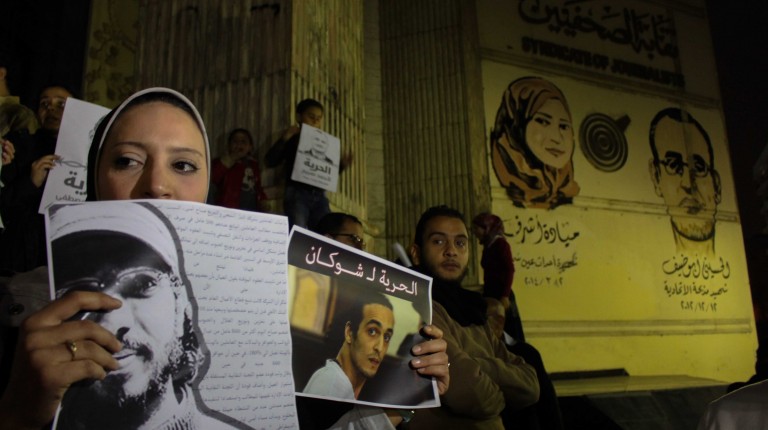 Head of the Freedoms Committee at the Press Syndicate Khaled El-Balshy held a meeting Monday with committee members and journalists to discuss how journalists will face new challenges following the decision to float the Egyptian pound implemented on 3 November.

“While newspapers are already facing financial struggles—some of them already considering turning print publications into electronic outlets—journalists are at a greater risk of facing limited job opportunities. This is in addition to upcoming difficulties in earning their living,” El-Balshy said.

He pointed out that people haven’t yet felt the impact of the government’s recent economic policies, but that with their next paycheque “journalists will realise how invaluable their salaries have become in comparison to price hikes”.

In a Monday statement, El-Balshy said the value of salaries decreased by 60% as a direct result of the Egyptian pound flotation.

Journalist Mostafa Bassiouni argued during the meeting that the legal minimum wage of EGP 1,200, which is hardly implemented, is not enough anymore. Bassiouni believes that journalists’ salaries should correspond to annual inflation rates.

“We have accumulated, increasing inflation rates since 2013, and journalists must be compensated retroactively,” he said. Bassiouni called on journalists to mobilise in defence of their right to work and decent wages.

Syndicate member Ahmed Abol Maaty also supported Bassiouni’s idea of adjusting salaries according to inflation rates. He further stressed the role that the syndicate should play in negotiations with the Supreme Press Council.

“Since the nature of our jobs is to work for employers, no journalist will be able to fight for his rights alone. There must be group movements within institutions, and the syndicate should be the intermediate between journalists and their institutions,” Abol Maaty said.

The meeting concluded with possible plans in the upcoming week to raise awareness on the impact of the economic situation on journalists.

The issue comes among several other press-related pending issues, including media and press laws and the trial of syndicate leaders.

El-Balshy is facing trial, along with syndicate president Yehia Qallash and secretary general Gamal Abdul Reheem. Their verdict will be announced on 19 November, on charges of hiding wanted journalists in the syndicate.