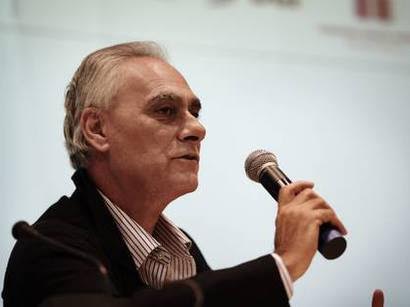 Two recent incidents involving the refusal of Arab teams to play their Palestinian counterparts on Palestinian soil highlight the Asian Football Confederation’s (AFC) willingness to play politics at the Palestinians’ expense at times with the connivance of the Palestine Authority headed by President Mahmoud Abbas.

The incidents further spotlight the consequences of the incestuous relationship between sports and politics that is nowhere more pervasive than in the Middle East. The AFC like other international sports associations propagates the fiction that the two are separate even if the politics that underlie its recent decisions and those of the Palestine Authority at times appear to contradict one another.

In the latest incident, the AFC handed a victory to the regime of Syrian President Bashar Al-Assad by endorsing the refusal of two Syrian clubs, Al Jaish, the soccer team owned by the Syrian military, and Al Wahda, to play their Palestinian counterparts in Palestine because it would involve crossing an Israeli border post. Israel controls the Palestine Authority’s West Bank borders.

Clubs from other Arab countries that do not have diplomatic relations with Israel, including Iraq, Oman, and Bahrain, have had no problem with passing through an Israeli border post to play their Asian Cup matches in Palestine.

The Syrian refusal followed an earlier Syrian advisory that its home matches would have to be played on neutral ground because of the brutal civil war in Syria. The Assad regime has used participation in regional and international competitions of its national soccer team and clubs from areas of Syria that it controls to project a notion of normalcy and government control despite the carnage wracking the country.

The AFC’s endorsement of the Syrian position meant that the Palestinian clubs Al Dahria and Ahli AlKhalil had to secure a neutral venue for their Asian Cup home matches even though it was a Syrian refusal that was putting the games in jeopardy.

AlKhalil was ordered by the AFC to find a neutral host country for its match against Al Jaish, sign a financial agreement, and secure visas for the Syrian club within a matter of days. The AFC awarded the match to Al Jaish and penalised AlKhalil with three penalty points when the Palestinian club failed to secure a neutral venue on time.

The penalising of Dahria for its failure to play Al Wahda seems even more egregious. In contrast to AlKhalil, Dahria finalised arrangements for its match to be played in Lebanon. Seven Dahria players and the team’s fitness coach were detained on arrival at Beirut airport and deported because they were carrying both Palestinian and Israeli travel documents even though they were entering Lebanon on their Palestinian passports only.

The Palestinian clubs were penalised despite the fact that the Palestinian Ministry of Civil Affairs certified in response to an AFC request that nothing prohibited Syrians from entering Palestine, according to a chronology of events presented to by the PFA to the AFC’s legal committee.

“One word describes it all: unfair,” said Susan Shalabi Molano, head of the Palestine Football Association’s international relations committee and a member of the AFC’s executive committee.

In a similar endorsement of political interference in soccer, the AFC failed to intervene when Mr. Abbas’ Authority bowed to Saudi pressure, including a phone call to the Palestinian president by Saudi King Salman, to move an earlier match between Saudi Arabia and Palestine to a neutral venue.

Mr. Abbas, supported by an official of world soccer body FIFA dispatched to Palestine to inspect the situation, spared the kingdom being penalised for its refusal to play in Palestine by certifying despite objections from the PFA that Palestine could not guarantee the security of the Palestinian players.

It was unclear why security was not an issue in the case of Oman, Bahrain, and Iraq. The AFC and FIFA’s reluctance to intervene in and effectively condone what was blatant political interference by King Salman and Mr. Abbas is all the more remarkable given Saudi Arabia’s willingness to cooperate with Israel in confronting Iran and to allow senior members of its ruling family and retired military officers to meet publicly with Israeli officials and former officers.

The AFC’s penalising of the Palestinian clubs and its handling of the Saudi affair seems in line with its recent suggestion that national soccer associations should not be penalised for political interference by governments because that is beyond their control and harmed clubs and grassroots football. FIFA recently lifted a ban on Indonesia while maintaining the barring of Kuwait on charges of government interference.

“Our Member Associations (MAs) are being punished for actions which are outside their control. It is not that the members have broken the rules but they are suspended because of the decisions taken by their governments. It is extremely damaging for the members, who are not only banned from playing international football but also lose their grassroots funding. Development is being hugely affected in these MAs through lost income from their sponsors, as well as funding from the AFC and FIFA. This, in turn, leads to staff losses and cancelled projects,” said Mariano V. Araneta Jr, chairperson of an AFC taskforce that looked at intrusions in the running of national soccer associations.

The AFC’s presumption that national soccer associations are victims rather than accessories, if not participants in political interference, is belied by the fact that most Middle Eastern and North African governing bodies are managed by members of ruling families or executives with close ties to the government.

The implicit call in the taskforce’s conclusion would effectively give those executives a blank check and deprive bodies like FIFA and AFC from much of the leverage they have. It would in effect legitimise the politics surrounding the Saudi and Palestinian cases. In the case of Saudi Arabia, the AFC’s suggestion effectively goes further, allowing the Palestinian government to impose its will on the Palestinian soccer association.

Playing politics means that the AFC and FIFA apply their rules selectively as is obvious in the case of both the Palestinian clubs and the Saudis. Both cases spotlight the need for international sports associations to drop the fiction of a separation of sports and politics, acknowledge the inextricable relationship between the two, and introduce a mechanism that transparently governs their inseparable bond.

Dr. James M. Dorsey is a senior fellow at the S. Rajaratnam School of International Studies, co-director of the University of Würzburg’s Institute for Fan Culture, and the author of The Turbulent World of Middle East Soccer blog and a just published book with the same title.