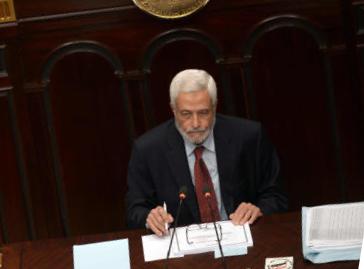 The Al-Qassam Brigades, the military wing of Hamas, denied on Friday that negotiations are taking place with Israel over four allegedly captured Israeli soldiers the Islamist group has held since July 2014.

“We assert that there are no communications or negotiations until now about the enemy’s captive soldiers,” a spokesman for the Al-Qassam Brigades, who goes publicly by the nickname Abu Obaida, said in televised statements.

Four photos were shown on the screen when Abu Obaida delivered his statement. Two of the photos depict Israeli soldiers Oron Shaul and Hadar Goldin, who were previously announced killed during the 2014 war in Gaza.

The other two photos depict Avera Mengistu, whom Israeli media has reported is not a soldier, and an unidentified fourth person.

“The enemy will not obtain any information on the fate of the four soldiers unless they pay clear entitlements and prices before and after negotiations,” Abu Obaida stated.

The spokesman’s statements come following statements by Israeli prime minister Benjamin Netanyahu last week in which he said there is “significant development” in the status of the soldiers, hinting at negotiations that must be kept low-profile.

“I have been briefed two days ago about a significant development, but of course it is impossible to achieve any progress on these issues except away from the limelight,” Netanyahu said in a press statement on Sunday. “This will not be the only achievement pushed forward in this manner, through secret channels, but it is certainly the first of its kind.”

Abu Obaida responded to Netanyahu, saying: “Netanyahu lies to his people. He deludes his crowd with these statements and deceives the families and relatives of the captive soldiers.”

Israel accuses detainee of recruiting, training Palestinians in Egypt for fight in Gaza