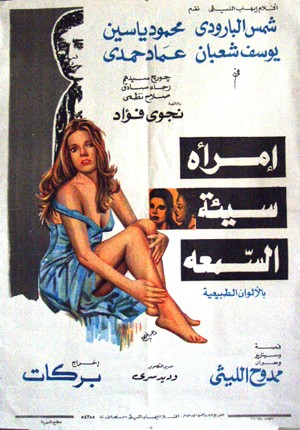 Film posters have covered cinema houses since Eid, one of the most important seasons for Egyptian Cinema. Eight films have been shown this season, achieving a total revenue of over EGP 30m, just over the four days of Eid, according to a report issued by the Cinema Industry Chamber.

Male stars have played important roles in these films. One of the films shown this Eid, “Omar w Salwa”  – which grossed around EGP 5.6m – featured the story of a man who tries to prevent his girlfriend from achieving her dream of becoming a performing artist. Other films include stories of conflicts between men over relationships, such as “Hadeed” (Steel), or fights over power, such as the sequel to “Al-Gezeera” (The Island).

“Some films are critical about some forms of masculinity and offer alternatives,” he said. The presented forms constructed an “ideal” for men to aspire to, often informed by class differences.

In many films of the 1950s and 1960s, men abused their power to control others, he said. “The Maalim”, a man of money and power in traditional neighbourhoods, is one of the most common characters of film in the fifties and sixties. The character is usually involved in crime.

Men were the main character in films. However, it was women who “guided” the plot, he said.

In “El-Fetewa” (The Tough), which was produced in 1957, a woman uses a man’s physical power to fight another man. With the help of his lover, Haridy – who had an inferior status in the vegetable market – fights his boss, the maalim. The couple get married and start to gain power in their business. In a story of conflict and crime, the wife plans for her man and supports him until the final scene, although he is not always thankful of her support, eventually leading to his own downfall.

“Al-Safira Aziza” (The Lady Aziza), which was produced in 1961, shows two forms of masculinity represented in the maalim character, who is violent and abusive, and the middle-class educated man character, the “more positive” ideal who is rational and respectful towards women.  The film depicts a story of a woman who pushes her husband, the teacher, to fight against her brother, the maalim, for her inheritance. To gain his wife’s love, the husband abandons his non-violent attitude to face the butcher brother.

“The ideal is contradictory in the film,” Van Eynde said, “It’s not useful to not be violent.” This film is different from “El-Fetewwa” in that it actually offers an alternative to the violent and misogynist maalim. Further, the ideal is informed by social mobility, since the main male character – the educated, yet poor teacher – aspires to a better lifestyle which he will achieve thanks to his modern education, but also by not entirely forsaking violence.

The “idealised” form of masculinity declines in the 1970s, said Van Eynde.

Films depicted men in crisis; whether through political turbulence post-1967 war, or economic recession, he said.

Men characters in “Emra’a Saye’at Al-Som’aa” (A Woman with a Bad Reputation) reflected the “westernised” elite in a negative moral representation, he said. In the film, which was produced in 1973, a man pushes his wife to have an affair with his boss, so he can achieve professional success. The woman continues her affair until she meets her old lover, who is depicted as “the good guy.”

In “Damy, Domoue’y wa Ibtisamty” (My Blood, Tears and Smile), which was also produced in 1973, the economic crisis and poverty pushes a woman to have an affair with a rich business man, give up her love to “the good guy”, get married to another young man who covers up her affair.

In both films, the ideal is a doctor or a medical student, Van Eynde said. Doctors and engineers, at that time, were portrayed as “the constructors”, who are essential to build the country.

“The good guy was depicted as an ideal,” he said, “but he can’t really achieve anything – he’s not heroic.”

The link between education and the heroic ideal disappeared by time. In the late seventies, many films, such as “Al-Asfour” (The Sparrow) and “Al-Karnak”, depicted the political struggle in the aftermath of 1967 defeat or the reasons for it. Both films portray men defeated by the war or by their realisation of having lived a lie.

In the eighties and early nineties, many films were based on the stories in Naguib Mahfouz’s famous novel “Al-Harafish”, he said.

Based on this novel, the films depicted more “human” men, who make mistakes, too, he said.

In “Al-Harafish, Al-Hob Wal Qodban” (Al-Harafish, Love and the Bars), one of five more than films produced in the eighties which were based on Mahfouz’s novel, the main character, who is a strong man who helps the weak, breaks his promises to his first wife – who cannot have children – and marries another woman. These men are portrayed as idealistic, but not as perfect ideals, as opposed to earlier ‘heroic’ men.

Other forms depicted in the eighties and early nineties included defeated masculinity, which was common in films reflecting life post-1973 war, where people “were stuck with the weak economy and inequality,” Van Eynde said. The antiheroes in these films are stark opposites of the strongmen of the fetewwa-films

One of the films that portray social life post-1973 is “Sawa’ Al-Autobees” (The Bus Diver). The film, which was produced in 1982, tells a story of a bus driver whose wife’s demands push him to work as a taxi driver at night, while she also wants him to be there for his family. To help his father through his struggle with debts, the bus driver sells the taxi. All these men portray some sort of crisis, unable to adhere to some dated ideal because of socio-economic and political crises.

The ideal representation of the male character changed to a “modern” form in the millennium.

“Taymour wa Shafiqa” (Taymour and Shafiqa) shows a “paternal” form of masculinity, Van Eynde said. Despite the modern, non-traditional life that the man lives in the film, he puts women at the same level of children and elderly, or – to put it bluntly – people who cannot take care of themselves.

“If you compare the 60ss to the 2000s, things differ shockingly,” he said, as representations have changed from a rigid gender order to an interesting discussion on gender relations.

The difference can be noted in the end scene of “Ibrahim Al-Abyad”, a film which has a lot in common with the story “Al-Fetewa”.

In “Al-Fetewa”, the woman supports her man, but she is the one directing him. In “Ibrahim Al-Abyad”, the

woman – who has a minimal role in guiding the plot – falls in her man’s arms. Despite being shot and brutally cut, the man carries her in a “sweet” but “paternalistic” scene, he said.

However, there are some exceptions, mainly in films directed by women. Women are sometimes depicted as independent and able to decide for themselves. But men too are not reduced to stereotypical roles and are instead allowed to be themselves, with their own aspirations and personalities.

“Ahla Al-Awqat” (Best Times), which was directed by Hala Khalil, depicts the story of three different women searching for themselves. Discussing family, friendship and romantic relationships, the film shows

“These films show a positive representation,” Van Eynde said, “where men and women can be respectful to each other.”