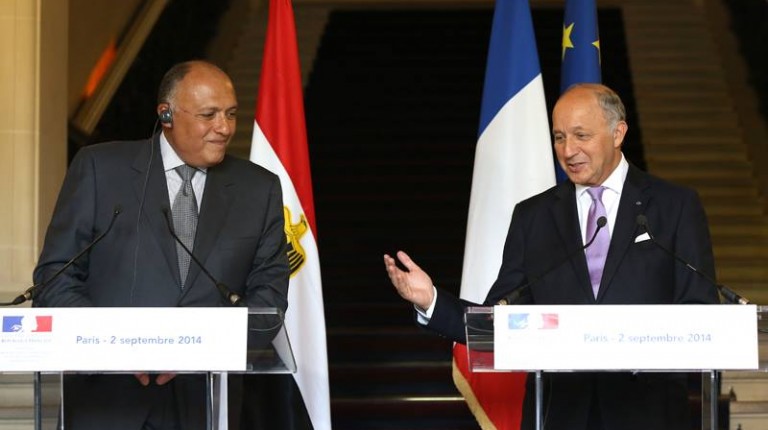 Speaking to reporters while on a state visit to France, Shoukry said: “We need a collective, international approach that includes various elements needed to fight this phenomenon: politically, militarily and socially.”

Shoukry, who met in Paris with French President Francois Hollande and French Foreign Minister Laurent Fabius, reiterated “an international commitment to work together [to fight terrorism]”. He echoed statements made a day earlier while speaking in Berlin to Norbert Röttgen, chairman of the German Parliament’s Committee on Foreign Affairs.

Speaking in Germany, Shoukry urged Europe to join Egypt in fighting terrorism, and to not “allow the misuse of principles such as freedom of expression to incite violence and sectarianism”.

When asked if Egypt was willing to use military forces to oppose a threat from ISIS, Shoukry said it is a possibility.

“We are ready to support the international community [with military assistance] under the resolutions of the United Nations. Each participant would have a different role, but it is premature now to determine what can be done by each state,” Shoukry said.

Foreign ministry spokesman Badr Abdelatty said that it is necessary to focus on fighting terrorism internationally, and not focusing solely on ISIS.

“Combating terrorism is a global phenomenon,” said Abdelatty. “In Egypt, in the Middle East, everywhere, the main objective is to destabilise and derail development.”

“Egypt is always supporting UN resolutions under the umbrella of the Security Council. We don’t like unilateral actions,” said Abdelatty.

While meeting with Fabius, Shoukry spoke extensively about strengthening cultural and economic ties, and improving infrastructure in Egypt. These include expanding the metro, developing the Suez Canal, and supporting mining projects, according to a foreign ministry statement.

On Wednesday, Shoukry was scheduled to arrive in Rome on the third and final leg of his European tour, where he was scheduled to meet Italian foreign minister Federica Mogherini. The Italian is set to take over as the European Union’s High Representative for Foreign Affairs and Security Policy.

Upon his return from Europe, Shoukry will head to Ethiopia, currently locked in a diplomatic dispute with Egypt over the ongoing construction of the Grand Ethiopian Renaissance Dam in the Upper Nile.

In June ISIS took over Mosul, one of Iraq’s largest cities, forcing Christians in the city to flee, pay a religious tax or be executed. The group has large areas of land in both Iraq and Syria, and commands a considerable armed force. The US Congress said ISIS has “ambitions and capabilities greater than Al-Qaeda”.

ISIS has made news in the last two weeks by executing American journalists James Foley and Steven Sotloff as retribution for air strikes by the US. A video released on Tuesday by ISIS showing Sotloff’s beheading also threatened a British citizen, David Cawthorne Haines, who is being held captive by the extremist group.