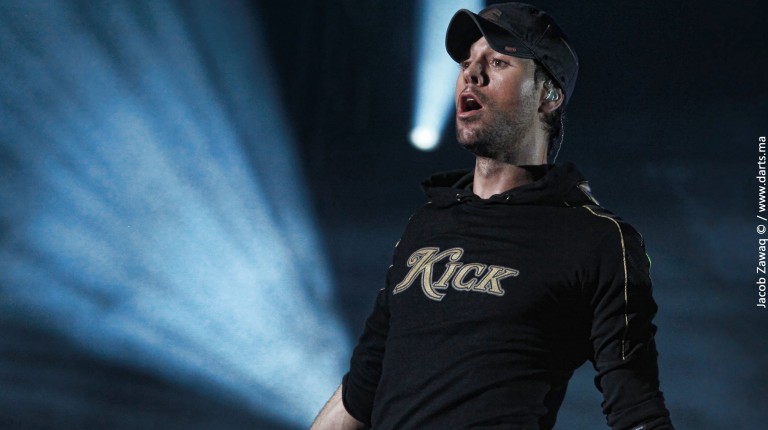 Just five years after launching his career in 1995, Enrique Iglesias became the most wealthiest singer ever, valuing at $50m – an unprecedented number in the 1990s. Since then, he has sold more than 100m records and 70m albums around the world. Daily News Egypt caught up with the superstar, who is set to perform in Alexandria 9 Aug., at the Mawazine World Rhythms Festival in Rabat, Morocco. We were pleasantly surprised to find that behind the success, Enrique is full of laughter, straightforward, and down to earth.

I’m so glad to meet you, and want to say that I’m one of your fans, just as my father is a fan of your father Julio Iglesias, the famous singer.

Iglesias (laughing): I am also happy to meet with a journalist from Egypt, and I want to assure you that you have better taste than your father because you listen to my music and not my father’s!

Did your father pave your path in music?

He didn’t have to pave any path for me. I knew the way because I had been close to him from a very young age.

So what is it the biggest thing you learned from him?

As a child, he helped me develop a sixth sense. I learned to distinguish between people, between those whom I could trust and those who were frauds. I remember going to one of my father’s concerts, and when he started to sing, I took the time to leave the concert grounds and explore what was around it. There were people hanging around there, who did not go to the concert and showed no interest in my father’s singing. After the concert ended, I found these people surrounding the stage and shouting comments like “This is the best concert we’ve ever attended!” and “You sang better than ever!” I said to myself, “You did not listen to his singing for a single minute.” I realised then that everything changes with fame. As an artist, you have to deal with hypocrites a lot of the time. But you should strive to surround yourself with good, honest people who tell you the truth, even if it is the bitter truth.

Do you think that artists are treated like commodities?

Yes… and it really bothers me when I’m treated like one sometimes. However, I’ve come not to care too much about this with time. I no longer care that I’ve become some sort of trademark. I’ve learned to distinguish between Enrique the commodity and Enrique the human being. The most important lesson I’ve learned in the past ten years is that the artist does not receive money just because he sings and writes songs, but he earns money because he is a commodity that people want. Maintaining this position is as challenging as maintaining the reputation of any commercial brand. It is exponentially difficult.

Why have you stopped writing songs?

I can no longer write songs. This is a fact I must accept. I don’t know if this answer pleases you, but I believe I should enjoy my life.

At the beginning of my singing career, I wrote songs for myself. I was overwhelmed by feelings of happiness and sadness, and translated them into songs. Now I don’t have the same ability to write, so I’ve decided to focus more on my singing.

You sing pop music, which mostly appeals to the youth. Do you think you’ve already reached the highest point of your career?

I think I will continue to sing until I reach my mid-40s. Then I’ll retire, buy a boat and fish all day long. I want to live in Mexico.

Are you worried about the public reaction to your music?

I’m calm but very anxious at the same time.

Why don’t you ever take off your sunglasses? You seem to have them on in every picture.

I’ll let you in on a secret. Sunglasses bring me back to the same feeling that I felt when I sang for the first time when I was 19 years old. Whenever I want to feel that again, I wear sunglasses.

Have you ever felt that you’re not able to control your artistic decisions?

Are you kidding me? There is not one moment in my career in which I felt that I don’t have control over what I’m presenting. From the moment I signed my first contract, I sat down with the director and told him: I will work with all the power I possess. I will kill myself doing this work. But the director did not just leave me to sing all the songs that I wrote and wanted to sing. From then on I wasn’t afraid to make mistakes as long as there was someone to help me with them.

Did your father’s name help you in your career?

I can’t say that it did. The first three years were a very difficult experience and were full of many disappointments. After the success of my first single song, I had to wait three years until my album came out and exceeded sales of 40m records.

How do you feel today, now that you’ve become extremely successful and have gained a global fan following?

I feel like I chose a wonderful job. I still can’t believe there are people who buy my albums and are excited about coming to my concerts. It’s the best feeling in the world.

How do you explain your biggest success, selling more than 100m records across the world?

I really have no explanation for that. Back when I was beginning my career, I couldn’t have ever guessed that someone would ask me this question. But I love what I do and I work hard for it. And when I see my audience I forget everything. At the end of the day, I do everything for my fans.

Isn’t most of your audience female?

(Laughing) To a certain extent, yes. There are guys who attend my concerts too, but 70% of my audience is female, while the rest is male. Their ages range from 5 to 85 years old.

Is it true that you plan on getting married soon?

This is true, but I haven’t made up a list of invitees for my wedding yet – maybe you could be one of them. Though I intend to marry, I don’t want to have children now because you need to devote your time to sit with them, and I’m not capable of this yet. So I don’t think I can be a father in this period of my life.

So is the takeaway that kids have no importance in your life?

They are important and I love them, but their stage might come after 10 or 15 years. My grandfather was in his 80s and he was still having kids. I do want to be a father at some point in my life, but for now I care more about getting married.

Do you have tips for the men reading this, on how they should be with women?

To be honest you’ve asked the absolute worst person. I wasn’t great with girls in high school or in university. I’d say though that married couples should do something new every day with their partners.

Is it true that the title of your album “Insomniac” has to do with the insomnia you’ve dealt with since your childhood?

That’s right. I’ve been suffering from problems with sleep since I was a kid, because I suffer from hyperactivity. Most songs of this album were recorded at night. Instead, I really wanted to get home early, enjoy the TV, and wake up early the next day to follow morning exercise shows. So when I thought about naming the album, I told myself that I should choose a name that can express and document the true condition of my life.

What’s going on with your new album?

It’s still going through a process of preparation. But selecting songs is proving to be difficult. I can’t sing the same songs thousands of times, so I’m stuck at the stage of selection. It may take months to finish everything.

A lot of people say that you look like the famous soccer player Cristiano Ronaldo.

I do not look like him. He’s imitating me. It’s annoying me, so I’m going to go complain to Zinedine Zidane about it.

Do you support Real Madrid or Barcelona?

I’m one of the biggest fans of Real Madrid. This doesn’t mean that Barcelona isn’t a great team.

Are you thinking about writing an autobiography? If so, who would you dedicate it to?

I don’t think I’ll write one, but if I did, I’d dedicate it to my mother.