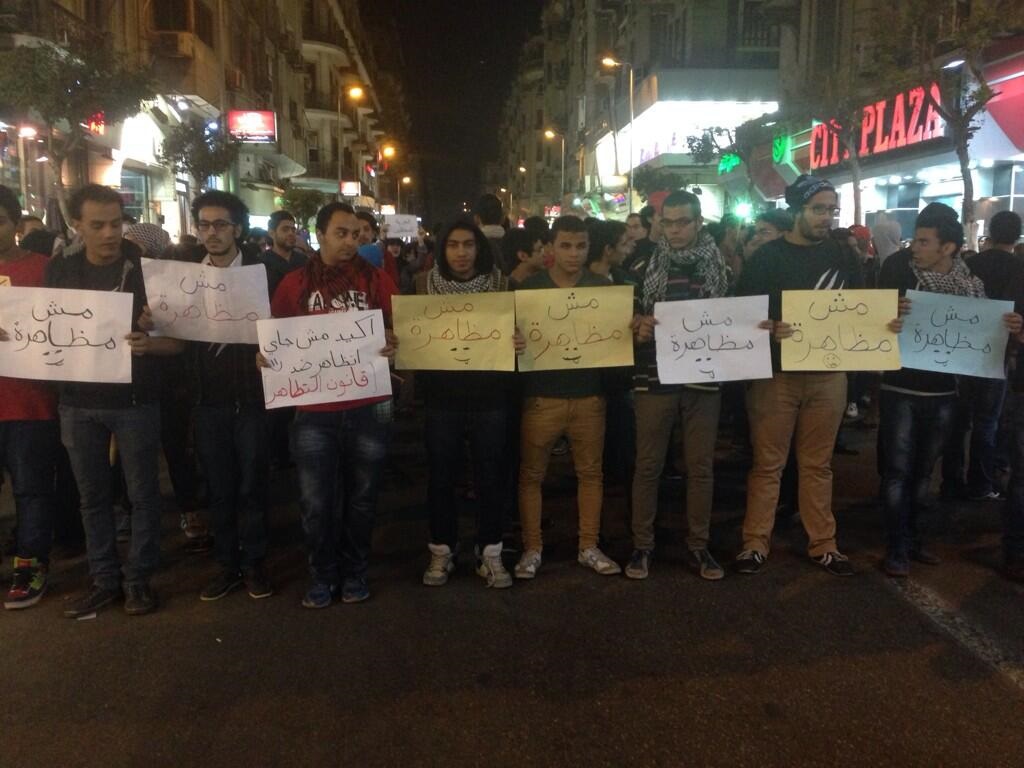 Around 200 people gathered in a protest held in downtown Cairo’s Talaat Harb Square Saturday in condemnation of the recently issued Protest Law and calling for the release of detainees arrested on Tuesday during the Shura Council protest against military trials for civilians.

Ahmed Hassan, one of the protest’s organisers, said they had not submitted any protest applications to the Ministry of Interior, as the new law stipulates. “We don’t need any permission to protest,” Hassan asserted.

He added that among the organisers are the 6 April (Democratic Front), Ultras Thawragy (Ultras Revolutionaries), Tha’eroon Hatta Al-Qasas (Revolutionaries Until Retribution) and Al-Moshagheboon (The Rioters).

Despite the protest’s clear defiance of the Protest law, security forces had not moved to disperse it at the time of writing.

“If they are copying international protest laws, they should reform the corruption in all sectors of the state like health and education,” said Amr, a demonstrator wearing a “Down with military rule” sweatshirt “Our 25 January 2011 Revolution was not a political one but a social one, so they have to fix our social suffering, then start worrying about the Protest Law.”

The protest remained in Talaat Harb Square without marching, contrary to Wednesday’s protest, which marched as far as the Shura Council building, almost 2.5 kilometres away from the square.

Protesters chanted against the Ministry of Interior, Muslim Brotherhood and what they described as “military rule.”

The Ministry of Interior said in a Thursday statement that as part of its commitment to law enforcement, “it warns everyone [not to] organise events, rallies, processions, or protests in violation of the law and without prior notice to the authorities.”

The ministry added that it would “deal with such illegal gatherings with decisiveness and firmness as guaranteed by the law.”