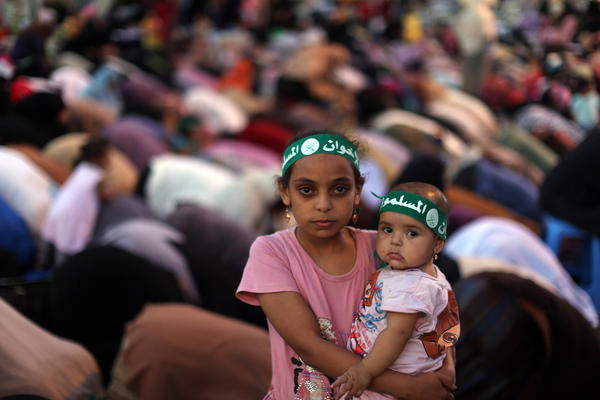 The National Council for Childhood and Motherhood filed a complaint to the Prosecutor General on Wednesday calling for the removal of children from the sit-in at Rabaa Al-Adaweya.

The council said in a statement released on Wednesday that children’s participation in sit-ins threatens the children’s rights system and increases the chances for children’s injuries and their exposure to health, psychological and safety hazards, reported state-owned Al-Ahram.

The council described children’s participation in protests as “a series of children’s exploitation from the Muslim Brotherhood in pro-Morsi protests.”

“I’m not surprised of such a statement since the council in its current formation holds members of [Mubarak’s] regime,” said Tarek Al-Morsi, Freedom and Justice Party spokesperson.

UNICEF also condemned the violence that has been used against children in recent protests in a statement on Tuesday.

“UNICEF is deeply concerned by reports that children have been killed or injured during the violent confrontations in Egypt over recent days,” Philippe Duamelle, UNICEF representative in Egypt, said in the statement

“Disturbing images of children taken during the street protests indicate that, on some occasions, children have been deliberately used and put at risk of witnessing or becoming actual victims of violence,” Duamelle added.

He said such experiences can affect children physically and psychologically, adding that such trauma can last for a long time.

“We call on all Egyptians and political groups not to exploit children for political ends, and to protect them from any potential harm,” the statement concluded.

Fady Wagdy, a lawyer at the ECCR, said the coalition is currently working on filing a complaint to the Prosecutor General about the issue, adding that it is collecting data to support the case.

“We [at the coalition] are currently looking into the accuracy of what has been circulating about an orphanage sending children to protests in Alexandria,” Wagdy said.

If such news is deemed true, severe measures have to be taken against it, Wagdy said.