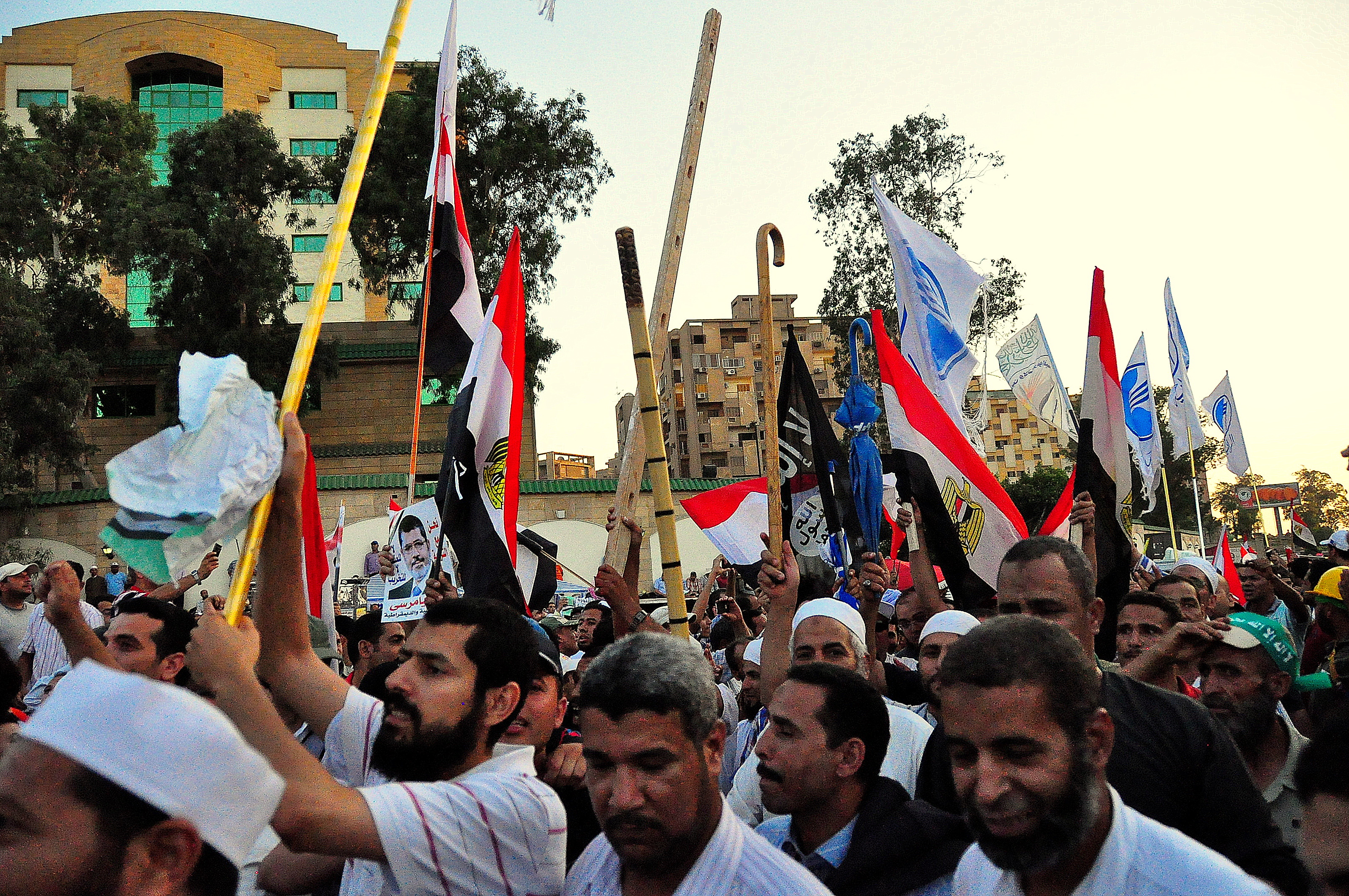 Hundreds of thousands of demonstrators declare they will protect President Morsi “with soul and blood” as their sit-in at the Raba’a Al-Adaweya mosque, Nasr City, enters its second day.

Echoing the stance of the Muslim Brotherhood’s Freedom and Justice Party (FJP), demonstrators said their protest is to remain peaceful but that any form of violence will be strictly for self-defense and maintaining order and calm.

The demonstration displays the high-level organizational ability of the Muslim Brotherhood, with checkpoints at all entrances and exits to the sit-in, and an internal security committee to guarantee the safety of those inside the area.

“There has not been a single incident of harassment, fighting or theft,” Amr Shamer, one of the volunteer security personnel, said. “We trust in the military and police to protect our country. Our revolution is peaceful but we will protect ourselves from any attackers.”

Thousands could be seen armed with wooden sticks for what they said would only be used in self-defense.

Several demonstrators said they did not rule out the possibility of marching to the presidential palace, where the opposition is expected to hold a protest Sundayin its call to oust President Morsi. Many said that their next move, whether it is continuing or ending the sit-in or marching to the palace, depends on the what will happen within the upcoming days.

Shamer added that, “if we felt there is a lack of security and spread of violence, we will do what we must to protect our legitimacy. We will not start the violence, we never have. These [anti-Morsi protesters] say they are peaceful, but all we see are the torching of our headquarters and brutal attacks on our supporters.”

Amid the numerous marches and chanting crowds gathered throughout the area, the Security and Order Committee held military-esque training for thousands of volunteers. The training is to prepare them in case clashes or violence break out.

The training involved participants stomping in place and marching across the street as they chanted, “Morsi! Morsi!” and “Allahu Akbar (God is great)!” It also included training in combat where volunteers practiced Taekwondo.

One protester called the training “a military display”.

Hanafi Hassanein, one of the main trainers, said they are training volunteers to “send a message to the whole world that [the president’s] legitimacy is a red line to all.”

“We will not relinquish the legitimacy of the ballot box. We are here to protect what the Egyptian people chose, not Morsi as an individual, but democracy as a whole,” he said.

Although the demonstrators reaffirmed that their protest is peaceful, several of the chants that rung across the area were of a different nature; “We will wipe the floor with them”; “Those who come near Morsi will regret it” and “We will teach them manners”.

The speakers on the stage also launched a verbal attack on several TV personalities that they associated with the old regime, such as Tawfik Okasha and Lamees El-Hadidy, and mocked the Tamarod (Rebellion) movement.

The stage also heavily focused on encouraging the hundreds taking rest under the shade of make-do tents to participate in the marches. The speakers would repeatedly lead demonstrators to chant, “Those sitting inside the tents, why are you not standing with us? […] Do you think this is a vacation?”

Between their political messages, the stage would occasionally blast religious songs and slogans. The crowd would respond by waving their wooden sticks in the air as they yelled, “Allahu Akbar!” At several points, the demonstrators chanted; “Oh you secularists, you will no longer rule Egypt, the [Islamic] caliphate is coming.”

Many demonstrators said the sit-in would continue until the opposition ends its attack on the legitimate election of President Morsi.

“I will not leave before the opposition leaves Tahrir,” Ramadan Wahdan, a Morsi supporter and member of the Al-Jihad Group, said. “Morsi has not been given a fair chance. Let us grant him his four years in office, and then the people will have the right to vote him out.”

Demonstrators have framed their cause as protecting the legitimacy of Egypt’s democratic process. One demonstrator, Tamer Saeed, argued that President Morsi had won legitimacy through the presidential elections, and six months later through the referendum on the constitution, which stipulates that the president is to stay in power for four years.

“As with any president, Morsi’s popularity will naturally have highs and lows,” Saeed explained. “There is not a country that would allow the opposition to take advantage of a moment when the president has a low popularity to demand his removal.”

Supporters of the current regime had declared an open-ended sit-in on Friday to counter the mass anti-government protests organized by opposition groups for Sunday.