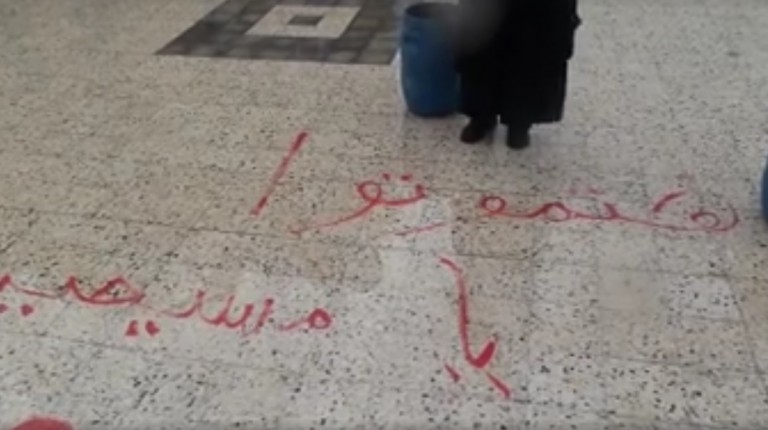 Video footage emerged Tuesday showing a hate message written on the floor of a church in Damietta.

The video, published on social media, showed the words “you will die Christians” written in Arabic across the floor. The 15 second video also shows a priest in the background.

“The man who did this was caught on security cameras. The authorities are currently looking for him, after they inspected the crime scene,” Father Alexandrus Georges said.

The priest said that it looked like the perpetrator used oil paint. He added that the material used was hard to remove. Furthermore, the priest saw on the security tape how the man kept mixing paint first and then drawing using a paint brush.

“Traces of the paint were found all the way from the yard to the church’s fence,” he said.

“There was an incident of robbery in the past, but never a terrorist threat such as this,” he added.

He further stated that security measures were being increased through cameras and barbed wire fences around the church.

The church is still running and hosting prayers on Tuesday night, according to Georges. “It will also host Coptic Christmas prayer rituals,” he said. “However, celebrations this year will be discreet given the bloody incidents that recently took place,” he added.

A nationwide mourning of victims who were killed in the bombing of St. Peter and St. Paul Church has overshadowed Coptic Christmas celebrations. On 11 December, the blast claimed the lives of 24 people, injuring more than 40 others, mostly women and children. The death toll has climbed to 27 in the past weeks.

Government to send church victims to be treated in Germany

Government to provide compensation for victims of church bombing