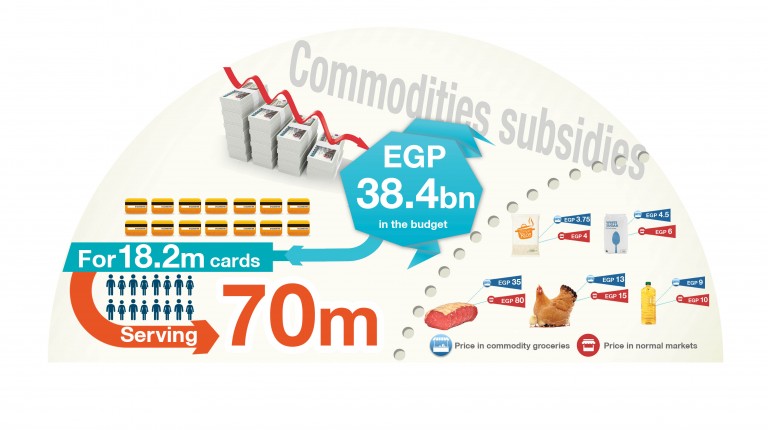 In recent years, the Egyptian government has pursued fiscal reform by imposing a series of austerity measures that aim to stimulate  GDP growth, reduce the budget deficit, and improve the credit rating of the country. However, these policies have had an adverse effect on some citizens for whom the immediate effects of the state’s policies have been a dearth in food supplies.

Over the past three months, citizens in Cairo, Alexandria and Minya have reported that cooking oil was not included in their monthly rations.

According to the Central Agency for Public Mobilisation and Statistics, Egyptians spend 48% of their income on groceries.

This comes after the government reduced the bread subsidy by 13% in the fiscal year 2014/2015 amid fears that government debt was spiralling out of control and could place undue pressure on the economy, according to a Ministry of Finance report, which predicted that if the government did not take immediate reform measures, government debt could reach EGP 1.9tr, or $265 billion, which would be the equivalent to roughly 93.6% of GDP.

In the intervening years, the erosion of foreign currency reserves and inflationary pressures on the Egyptian pound have seemed to amplify the already existing pressures on the food market and the economy at large.

However, the government has spent more than what was allocated for food subsidies. In the past fiscal year, the government allocated EGP 34.05bn to subsidise basic food commodities, a 10% increase from the EGP 33.8bn allocated in the budget for FY 2013/2014. However, in the year’s final balance sheet, the government surpassed its projection, spending EGP 37bn.

The number of ration cards in Egypt has reached 18.2m cards.

Cooking oil shortage out of control

Mahmoud Amin, 65, a Haram resident, said that when he headed to the commodity seller for February he was told to take two packs of sugar as a substitute for the scarce supply of cooking oil. In other locations, rice was reported to be in short supply.

Speaking to the Daily News Egypt, spokesperson of the Syndicate of Grocers Maged Nady contended that during the past year and a half, referring to period concomitant with the commencement of the new food subsidies system, there was no issue with food rations as the grocers were receiving commodities from the ministry, handling their distribution, and selling them to citizens.

“The system was successful owing to how we managed distribution; we didn’t like our  success being attributed to the Minister of Supply Khaled Hanafy,” Nady said.

Since the beginning of February, Hanafy told the grocers that the ministry will control the distribution, “and then the shortage in cooking oil and rice occurred,” Nady added.

According to Nady, the ministry has stopped distributing well-known food brands that citizens were accustomed to buying from the grocers and substituted it for other brands to save money. “But no one buys these strange brands so this is a waste of money anyway,” he insisted.

Addressing the shortage, the ministry has said it started to allocate 3,000 tonnes of cooking oil every day to commodity groceries. The ministry also claimed that it extended the deadline for citizens to obtain the ration commodities to the first week of March.

However, Nady disregarded this statement, saying that the shortage will persist throughout March “as long as the ministry is still in charge of the commodities distribution.”

Minister of Supply Khaled Hanafy attempted to assuage fears that the recent commodity shortages will extend into a protracted issue.

He told Daily News Egypt that he ordered to supply the market with the needed commodities. However, he did not clarify the particular mechanisms or the financial means by which provisions of the commodities supplies would be provided.

Hanafy has recently faced several challenges ensuring Egypt’s food security. Last month, suppliers boycotted an Egyptian call to tender to protest new import regulations. The boycott followed the decision by the General Authority for Supply Commodities (GASC) to reject a 63,000 tonne import shipment of wheat from France in January, which contained a 0.05% trace of ergot fungi.

The rejection of wheat import shipments raised concerns over whether EU countries would halt their grain exports to Egypt completely. The government has since allayed this worry by importing 60,000 tonnes of wheat last week.

On the broadcast of his television show on the ONTV satellite channel on Tuesday night, Youssef Al-Husseiny criticised the supply minister for not “implementing his promises”.

An integrated commercial city is among the minister’s promises, which Hanafy announced in April 2014. At the time of its announcement, the city was proffered as a way to centralise shops, offices, and other commercial activities. However he recently has remained silent regarding any further steps to implement the planned city.

In 2014, Hanafy sponsored a project to establish a global logistics centre in Damietta for the handling and storage of grain and food commodities, with investments totalling EGP 13bn.

Despite the government’s claims that the project was of commensurate in importance with the Suez Canal Area Development Project and that several international consortiums have offered to carry out the project, it has not been mentioned in the government’s recent plans.

Following reports by several media outlets regarding ongoing complaints from citizens of a food crisis due to a rations shortage, Minister of Supply Khaled Hanafy issued a decision to appoint 28 new chairmen for the companies affiliated with the Food Industries Holding Company in the largest single move to restructure companies.

“There is nothing strange about this,” Hanafy told local media regarding the move. However, the timing of the move has prompted some to question the minister’s motivation.

According to Nady, the changes came to increase the “grip” of the ministry over the distribution of products.

Tantawy told Daily News Egypt in a phone interview that they were asked to submit their resignations: “We were told the ministry wants new blood in the management of the affiliated companies.”

When asked about the timing of the changes and whether it is related to the rice and cooking oil shortage, Tantawy said he was not aware of any correlation between the two phenomena. However, he did attribute the shortage of cooking oil to a delayed import procedures prompted by the ongoing foreign currency shortage in the country.

The erosion of foreign currency reserves at local banks has prompted the government to attempt to find measures to insure imports while also prioritising products the government has judged essential. The government aimed to limit “non-essential products” in January with the aim of “protecting the local industry”.

Starting in February, several products were prohibited from being imported unless their factories were registered with the General Organisation for Import and Export Control (GOIC), which is affiliated to the Ministry of Industry.

Basic food commodities, including cooking oil, were not on the list of banned products, which in fact aimed to give priority to food imports. The list of products described as “luxurious” includes dairy products, canned fruits, cooking oil, chocolates and products that include cocoa, sugary products, baked products, feminine hygiene products, and fruit juices.

“The Ministry of Supply is to be blamed for the shortage of cooking oil and rice, not the consumer complexes or grocers. The managerial restructure is because we are seeking better performance,” Tantawy said.

Hanafy announced earlier that he plans to increase the revenues of the government’s holding companies.

In 2014, the Ministry of Supply adopted a new policy for ration cards, which provided citizens with access to 20 different products, whether produced by private companies or the General Authority for Supply Commodities (GASC). However, several citizens have reported that their names have been removed from the list of registered beneficiaries in the transition to the new programme.

Under the terms of the programme, each ration card holder can buy any quantity of items and the state will bear EGP 15 of the total cost.

The previous ration card system offered each citizen holding a ration card 2kgs of rice, 2kgs of sugar and 1.5kgs of cooking oil. To keep the prices low, the state paid EGP 14 of the cost of these products.

However, the new system has proven to be more of a hassle than an improvement for some citizens. Some already-registered ration card holders are no longer finding their names as beneficiaries for the monthly food commodity granted by the government.

Fatma Hassanin, 52, a housewife living in Imbaba, told Daily News Egypt that after shifting to the smart card system, she can’t obtain her monthly ration as the her name is not listed in the government’s digital database.

“I was dropped from the system without knowing why,” she said. “I’m now forced to purchase my household necessities from normal supermarkets at higher prices, although I’m eligible for the subsidies.”

Malak Fahmy, 41, who is experiencing the same problem with her card, said that the supply directory told her to file complaints to the ministry.

“I did [as the supply directory told me] but no one got back to me,” Fahmy told Daily News Egypt.

Before the announcement of the new system, the Ministry of Supply said that around 222,000 citizens “voluntarily” voided their ration cards after judging themselves “ineligible” for subsidised commodities.

This action was taken through the official website for ration cards, which was established to facilitate the registration process and collect the required data for these cards, a statement from the ministry said.

Adopting the same policy, the government implemented a new smartcard for the bread subsidy system in 2014, providing “high-quality” subsidised bread at five piasters a loaf. The programme also provided for a maximum of 150 loaves for each registered citizen per month, the ministry said.

In the fiscal budget for 2015/2016, the government did not specify the amount allocated for bread subsidies alone. Last year, the state’s budget for subsidised bread was reported at EGP 24bn, recording an EGP 2bn increase from EGP 22bn in FY 2013/2014.

‘Do you really need a new smart phone – or do you just want one?’

Holding company to be established to promote Egyptian products in Africa