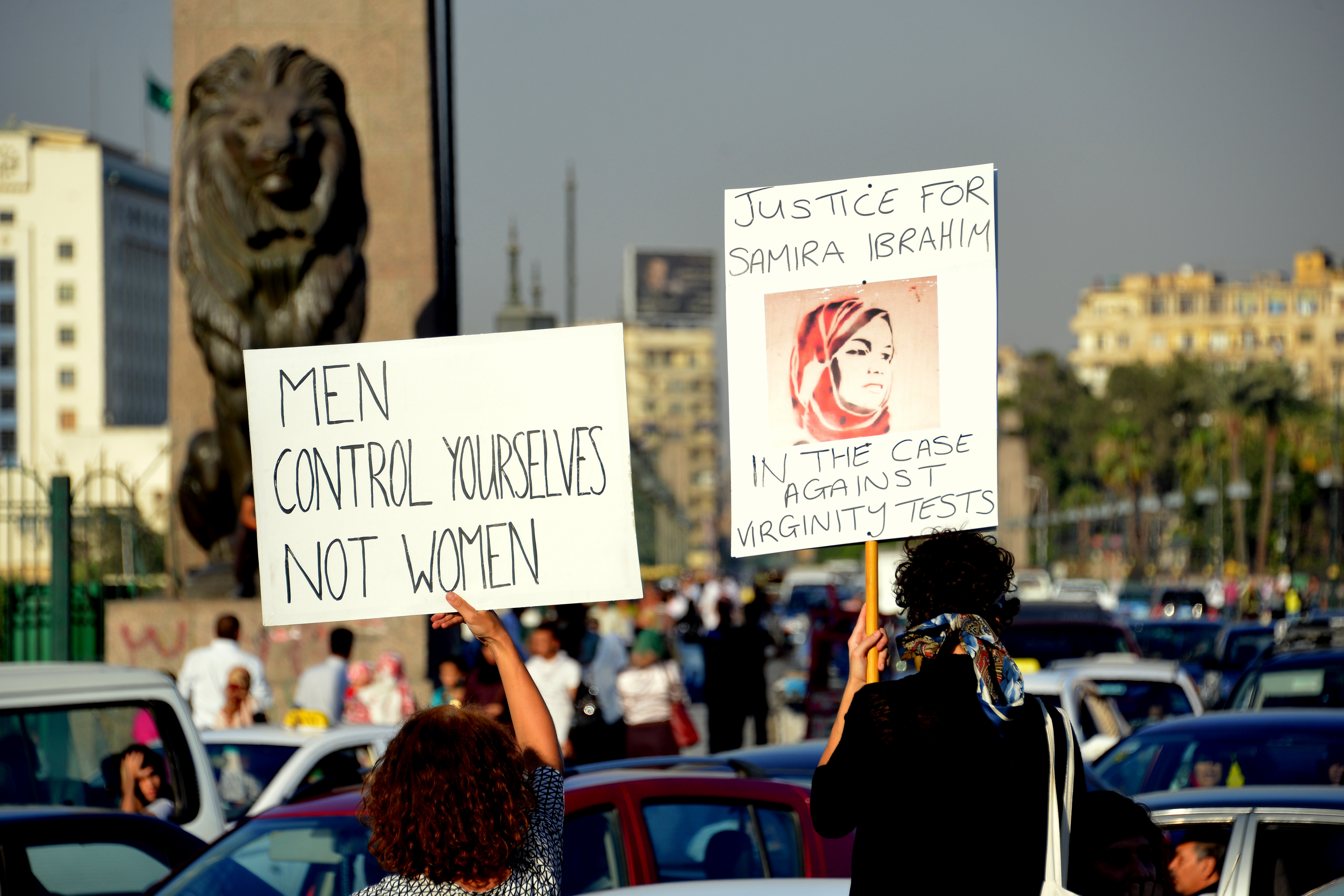 Several hundred demonstrators gathered outside the Cairo Opera House on Saturday evening to protest the ongoing phenomenon of sexual harassment and sexual assault on Egyptian streets.

Dubbed “Walk Like An Egyptian Woman”, several anti-harassment groups were widely represented, including I Saw Harassment (Shoft Taharosh) and Dignity Without Borders, while others came independently to express solidarity with the cause, many holding placards demanding women’s rights.

Turnout for the demonstration was lower than initially expected after several groups pulled out when the controversial government-funded National Council for Women (NCW) announced they would participate in the rally.

Participants in the rally included women, men, Egyptians and foreigners. Many expressed the opinion that a paradigm shift regarding the culture of sexual harassment needs to simultaneously come from the government and from grassroots organisations, and cited the new law sexual harassment law passed by former interim president Adly Mansour as progress.

“[The new law] needs more details, but it’s a step in the right direction. In view of what’s happening, it’s a bit lenient. We need to have harsher sentences,” said Nevine El-Taweel, a protester at the rally.

El-Taweel attributed the increase in sexual harassment, sexual assault, and gang rape to a lack of stability in Egypt.

“A lack of security forces, a lack of education” is to blame, said El-Taweel. “The country has been in flux. It’s a combination of factors. Whatever it is, we need to address it and make sure it gets better.”

At least three people from the rally were taken into police custody at the demonstration. Two men were arrested for holding a sign that said “We will not forget the Ministry of Interior’s sexual harassment” in Arabic, while another man at the protest was arrested on accusations of sexually harassing demonstrators.

Pam Labib, who attended the protest with a group of friends, said she was there to take back a public space from the heavy presence of police and NCW members, who she said are complicit in the sexual harassment.

Labib described the police and NCW presence as a charade, ignoring past transgressions, while Rasha Abdullah, a professor of journalism and mass communications at The American University in Cairo, boycotted the protest because of the NCW participation.

“I pulled out over the involvement of the National Council for Women,” said Abdullah via email.

Shortly before ceding power, former President Adly Mansour issued a decision on Thursday amending Article 58 in the Penal Code, to define the term “sexual harassment” as a crime and introduce harsher punishment for its practice.

The legislation expands the definition of sexual harassment, stretching it to include the use of sexual innuendos through “signs”, whether verbally or physically.

A report issued by the United Nations Entity for Gender Equality and the Empowerment of Women in April 2013 revealed that an overwhelming majority of Egyptian women (99.3%) have experienced some sort of sexual harassment, and 96.5% of women had been sexually assaulted.