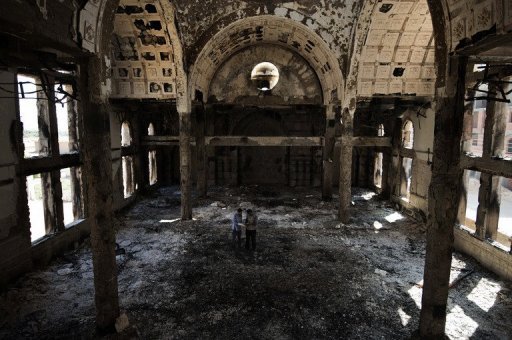 Military engineers visited on Tuesday the sites of churches that were damaged in Minya, ahead of reconstruction efforts.

State-run MENA reported that the engineers are there  to assess the damage to start reconstruction immediately.

Security forces launched a campaign on Monday in an attempt to restore order to Delga, a village in the Minya Governorate, resulting in the arrest of 56 wanted persons. The Ministry of Interior said the campaign, which started Monday morning, is ongoing.

State-run news agency MENA reported on Tuesday that 13 people were arrested in Minya. They were wanted for assaults on security, religious institutions, and public property.

Sectarian tensions in Delga over the past few weeks have left three out of five of the village’s churches damaged as a result of attacks.

Delga is Minya’s closest village to the Minya desert road. Signs of sectarian tensions were evident as early as 30 June, but have dramatically escalated on 3 July, the day former President Mohamed Morsi was ousted. In addition to the attacks on churches, the homes and stores of Christians were also targeted.

Researcher with the Egyptian Initiative for Personal Rights (EIPR), Ishak Ibrahim, had said on Monday that sectarian tensions in Delga have left two people dead.

The National Council for Human Rights said in a statement on Monday that there are indicators suggesting “systematic targeting” of Christians in Minya because of their religious identity.

Problems in Delga, like other issues in Egypt, reflect the polarization among Egypt’s political players.

A statement by the Muslim Brotherhood’s press office in London on Monday described the security campaign as a “full scale attack” on Delga. The Brotherhood said it condemns the attacks on Coptic Christians and places of worship, including churches “as well as indiscriminate attacks on the innocent civilians in Delga by the military junta, which claims to protect Christians from ‘Islamist Militants’.”

The Brotherhood said it holds the “military junta” responsible for this attack on civilians.

The National Coalition to Support Legitimacy also denounced the “raid” of the village of Delga in a press conference on Monday, stating that: “the siege on the village was after a rumor that Al-Jamaa Al-Islamiya leader, Assem Abdel Maged, was taking refuge within.” The coalition is made up of 11 unions and parties that support ousted President Mohamed Morsi.