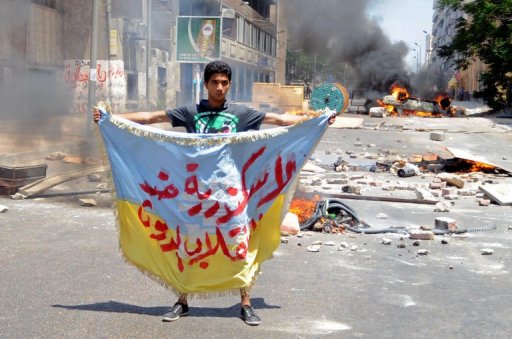 Chanting “Morsi is my president,” the protesters set fire to car tyres and tore down pictures of army chief Abdel Fattah al-Sisi, who was behind the Islamist leader’s July 3 overthrow.

At one cafe where Sisi’s picture was hanging, they smashed the doors and beat up the patrons as they shouted “Sisi is a killer.”

In the Ibrahimiya district, they stormed a police station and looted furniture and equipment inside, an AFP reporter said.

Earlier, in another part of Alexandria, tear gas canisters rained down on a pro-Morsi march in the Sharq neighbourhood, amid repeated bursts of automatic gunfire.

Hundreds of Morsi loyalists had marched through the city when police fired tear gas to disperse them.

Residents, armed with clubs, came out of their homes and shops to help the police, detaining Morsi supporters and handing them over to officers at Sharq police station.

Morsi supporters, carrying Egyptian flags and pictures of the deposed leader, then clashed with his opponents on a road carpeted with rocks.

Officials said at least one person was killed in the Alexandria violence and that 10 people were injured.

Deep political divisions in the country have intensified since his removal, with the Islamist leader’s supporters vowing to keep fighting for his reinstatement at any cost.